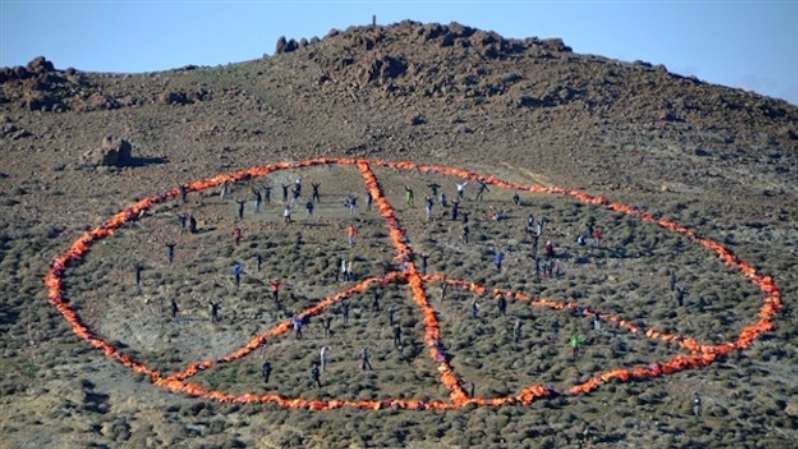 The workers for Greenpeace, Médecins Sans Frontières/Doctors Without Borders, and other groups created the message to honor those who left the life jackets behind and offer hope that conditions will improve, Greenpeace said in a statement.

The volunteers are working on Lesbos, a Greek island where more than 500,000 refugees from Syria, Afghanistan, and Iraq have landed after crossing the Mediterranean Sea.

These refugees have left behind thousands of life jackets, which have grown into a huge rubbish dump on the island.

__new_in_first_article1__
“The dump site stands as a statue, a silent reminder of the risks and that so many more still hold out hope of a safe crossing,” Greenpeace said. “It also includes the life jackets of those who never made it, of those who lost their lives at sea and can never return home or continue their journey north.”

Greenpeace said that the number of refugees crossing to Greece has declined since the fall, but even so more than 100,000 people came in December alone.

The group said that more than 3,700 refugees died in 2015 trying to cross the Mediterranean into Europe, and they will continue to come in the new year.

“We also urge our supporters to share the peace sign image in honor of the refugees and migrants and as a way of thanks to the volunteers and local communities on Lesbos working to ensure that 2016 can start with a safe passage,” it said.