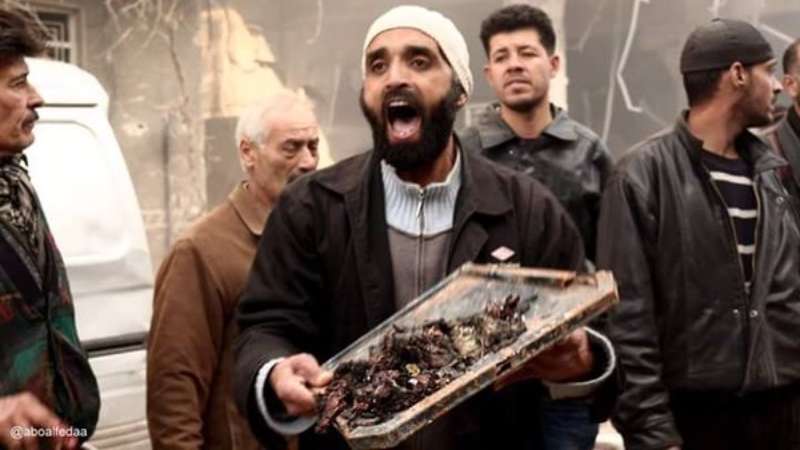 Syrian flesh for sale
Orient Net-Agencies
The death toll from a Syrian regime assault on a suburb of Damascus rose to 53 on Sunday morning.
Assad regime fighter jets hit a popular market in the Kafr Batna district of Eastern Ghouta, some 15 kilometres east of central Damascus, on Friday evening.
Local activists told the Turkish Anadolu Agency on Saturday that the death toll had risen to 53.
Eight of the bodies were completely burned and remained unidentified the day after the attack, activists from the local co-ordination committee said.
A video purportedly from the scene showed a man holding a metal screen filled with charred remains, shouting “Syrian flesh for sale”.
“We are not military people – we’re not from Jaysh al-Islam and not from al-Nusra Front, or any other group. We are civilians,” the man was heard saying.
Eastern Ghouta was one of the first areas to fall into the hands of the armed opposition and faces frequent bombardment by Assad forces.
Thousands of civilians are trapped by a regime siege on the area that has been in place since 2013.
A recent report by Amnesty International accuses Assad regime of ignoring UN Security Council demands to allow aid to be delivered to civilians there, leaving many without access to sufficient food, medicine or electrical power.