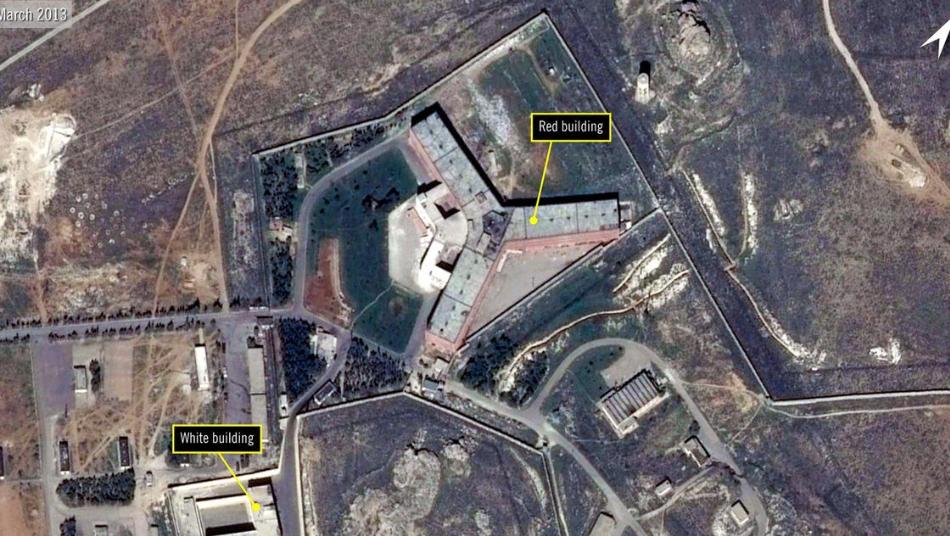 A satellite image shows Syria's military-run Saidnaya prison, located 30 kilometres north of Damascus. CNES and ASTRIUM / Amnesty International via AFP
Orient Net
As a landmark trial takes place in Germany, families of people missing in Syria's prison system describe of anguish, bribery and torture
The families of people missing in Syria’s notorious prison system say they fear they will never see their loved ones again due to the spread of coronavirus, as a landmark trial over state-sponsored torture gets under way.
It is estimated that anywhere between 75,000 and over 200,000 people are missing in Syria, with many thought to be either dead or forcibly detained.
Despite appeals from aid groups such as Amnesty International, families say little is being done to hold the regime to account and that the international community has failed to protect the Syrian people.
It comes as two alleged former Assad intelligence officers appeared in a German court on Thursday, charged with crimes against humanity for the treatment of detainees in their care in the first court case over state-sponsored torture by Assad regime.
While the case offers some hope, it is being held on the principle of universal jurisdiction, which allows a foreign country to prosecute crimes against humanity, as the International Criminal Court is hamstrung by vetoes from Russia and China. Defendants Anwar Raslan and Eyad Al Gharib are accused of multiple counts of murder, rape and torture.
“It is not just [our family members] who are being tortured, we are being tortured, too,” said Garam Zarim, whose four uncles have been missing since they were detained by the regime in 2013.
“Where are my loved ones? Just give us information, you don’t even need to let them go.”
The project manager, 30, originally from the north-eastern city of Latakia but now living in southern Turkey, said that with no news of her uncles’ whereabouts and unable to confirm their deaths to hold a funeral, the lack of closure casts a long shadow over everyone in the family.
The wife of one uncle attempted to sell her home for the US$2,000 needed to bribe prison guards for information. Paying for news of a friend or relative is a common occurrence among those who can scrape together the cash, said Ms Zarim, but that is not easy in a country stricken by almost a decade of war and the economic problems that go with it.
“I have now heard rumours that coronavirus is in Deraa jail. There are as many as 50 people per cell there and he (Bashar Assad) wants them to die.”
Umm Muhammad, 45, a farmer who now also lives in Turkey’s Hatay province, was detained for six months in 2013 alongside two of her sons and has not seen or heard news from them since.
“I underwent the most severe torture, causing anxiety and extreme fear. I was subjected to beatings that led to a severe nervous breakdown and was locked up in a prison cell with 60 other women,” she said.
“We shared one bathroom in the cell and drank polluted water from the toilet. The food they gave us was rotten and spoiled. There was no soap in the bathroom. Cleansing hygiene was very poor. It was indescribable.”
She said she is now especially worried about her sons and other detainees because not only is coronavirus highly contagious and conditions in prison dire, the measures in place to combat the spread of the disease means that it is almost impossible to continue her search for them.
“Prisoners where I was held had head lice. No medication was available and people suffered from diarrhoea until they died,” she said.
“If one inmate gets infected, it will be passed on to all the others and cause a humanitarian disaster.”
For some families, the pain of not knowing is worsened by inaccurate information. Ms Zarim said that although the Assad regime has pronounced one of her uncle’s dead, the family do not believe it was true.
“Parents do not trust the information handed to them by civil departments, which should be a trustworthy source. Some people are being released alive when their civil documents say they are dead,” said Amal Al Nassim, chief executive of Amal’s Healing and Advocacy Centre, which represents the families of Syria’s missing people.
Ms Al Nassim said that one family found their son to be alive two years after they were told he was dead, had been presented with a death certificate and held a funeral for him.
“Survivors of torture have spoken about the lack of health and food care and the most important life necessities in prison, and now families have to add to that the threat that their relatives may die from coronavirus.”
Several Syrians who spoke to The National said that the recorded number of deaths from heart attacks, even in teenagers, and pneumonia has grown at an unusually high rate in the last few months, while the official number of deaths and cases of Covid-19 in the country remain relatively low.
Families say they not only worry the regime will not protect their loved ones – who are mostly held under loosely defined and politically motivated charges – from the pandemic, but that it is a convenient ‘get out of jail free’ card for a regime with many unexplained deaths to account for.
“Our objective is that it is important the regime reveal the state of our missing persons and allow international commissions and medical commissions to offer health care in detention centres, that families be allowed to see their children, and that dead bodies are surrendered,” said Ms Al Nassir.
“The mothers of the martyrs can sleep while the mothers of the detained and the missing cannot.”
Based on the National