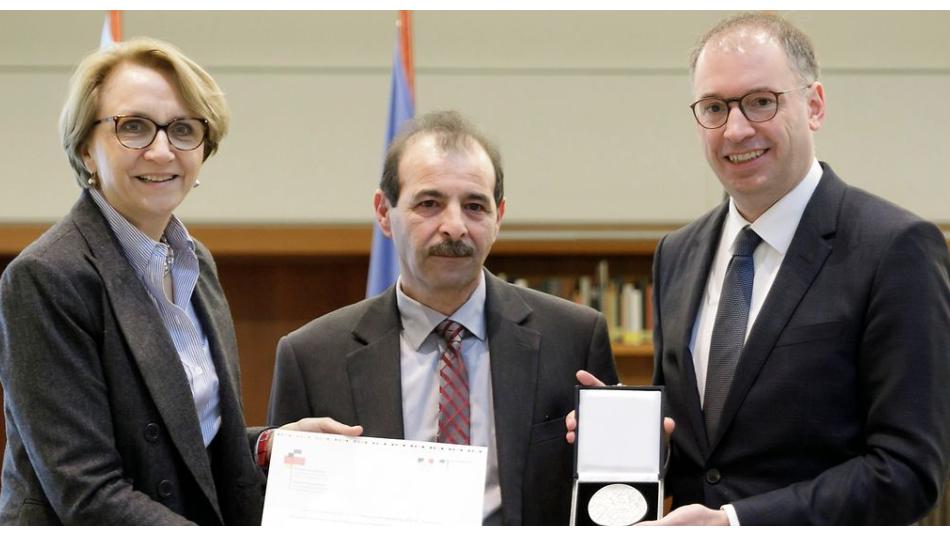 When Anwar al-Bunni crossed paths with fellow Syrian Anwar Raslan in a DIY store in Germany five years ago, he recognised him as the man who had thrown him in jail a decade earlier.
On Thursday, the two men will face each other in a German court, where Raslan will be one of two alleged former Assad intelligence officers in the dock accused of crimes against humanity for Bashar al-Assad's regime.
In the first legal proceedings worldwide over state-sponsored torture in Syria, Raslan will be tried under the principle of universal jurisdiction -- which allows a foreign country to prosecute crimes against humanity.
For Bunni, speaking to AFP in Berlin, the trial will send "an important message" to the Assad regime: "You will never have impunity, so think about it!"
I knew this man
Germany has taken in more than a million asylum seekers -- many fleeing war in Syria and Iraq -- and as a result sometimes become a surreal arena where victims run into their erstwhile torturers in the street.
Raslan, a former colonel, arrived in Germany as a refugee himself in July 2014, having deserted the Assad army two years earlier.
Bunni said Raslan was the man who arrested him at his Damascus home in May 2006 and threw him in a state prison, where the lawyer spent five years until he was freed during the Syrian uprising in 2011.
The two men arrived in Berlin within two months of each other, and crossed paths when they were briefly staying in the same centre for asylum seekers.
"I told myself that I knew this man, but I didn't recognise him instantly," Bunni told AFP, drawing on an e-cigarette.
A few months later, he came face to face with his alleged captor once again -- this time in a store -- and finally recognised him.
__new_in_first_article1__
Not about revenge
A Syrian lawyer in his sixties, Bunni was an indefatigable advocate for human rights in his home country, but has lived as a refugee in Berlin.
Unable to pursue his profession in Germany, he now collects evidence and testimonies against the regime.
While Bunni will not be one of the plaintiffs in Thursday's trial, he is a respected figure in Germany's 700,000 strong Syrian community, and has convinced numerous victims to come forward.
In 2016, when he started working together with local lawyers, Bunni learned that German investigators already had their eye on Raslan, who was arrested in February 2019.
Raslan now stands accused of having overseen the murder of 58 people and the torture of 4,000 others while in charge of the Al-Khatib detention centre in Damascus between 2011 and 2012.
Another Syrian, 43-year-old Eyad Al-Gharib, is accused of having been an accomplice.
"This is not about revenge, it is about exposing the truth," German lawyer Patrick Kroker told AFP.
He represents six Syrian plaintiffs, who may yet be joined by a further two women.
Now refugees in various European countries, these victims of torture by the Damascus regime "want the world to learn about what happened there," said Kroker.
Physical mistreatment
__new_in_first_article2__
All those who are set to testify in Koblenz were "subjected to physical mistreatment, in some cases very brutally and over a long period" in the state prison, said Kroker.
Their supposed crimes included "taking part in demonstrations, filming demonstrations... or collecting medicines for those injured at demonstrations", the lawyer added.
Many victims have preferred to remain silent, terrified of reprisals against friends and family members back in Syria, or of retribution from regime agents in Europe.
For Bunni, the fight is far from over.
Around a thousand Syrians implicated in the crimes are now living carefree lives in Europe, he claimed.
Meanwhile people are still being tortured at the Al-Khatib prison, he adds.
The witnesses in Koblenz are speaking not only for themselves but also for their fellow victims, said Kroker.
"Most of them said: 'I am also doing this... to make it clear what this means for many others who perhaps can't be here, either because they are still imprisoned, because they have to be afraid, because they can't come to Europe or because they died under torture."
In 2018,As part of the events marking the special anniversary, Minister of State Niels Annen and France’s Ambassador to Germany Anne-Marie Descôtes presented the award in Berlin to the Syrian recipient Anwar al-Bunni.
The Syrian human rights defender, who has spent time in prison in Syria because of his work, is committed to the legal monitoring of systematic human rights violations. He has been living in Germany since 2014, which is why he was awarded the prize in Berlin. Al-Bunni is one of 15 laureates from 15 countries who work to promote respect for and enforcement of universal human rights and the rule of law.
Based on AFP
قيم هذا المقال 10 0