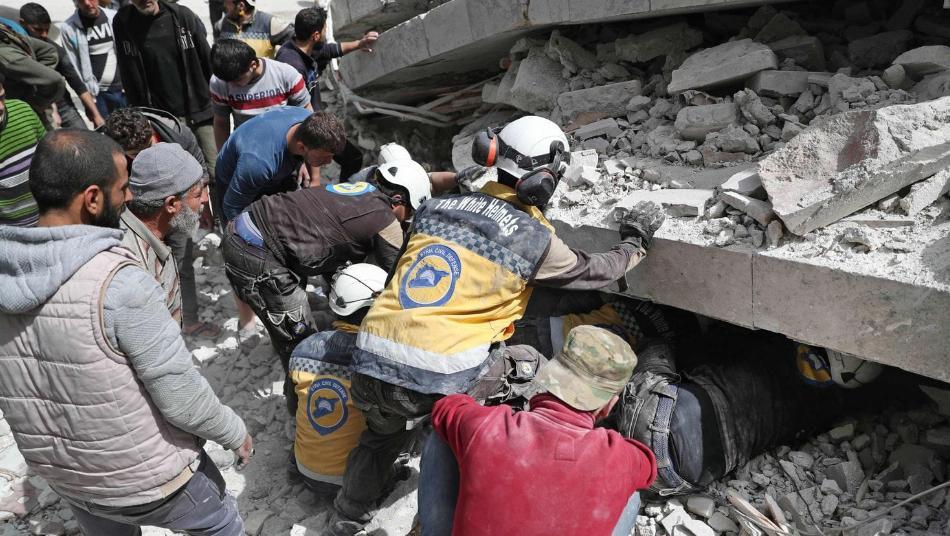 Members of the White Helmets search the rubble of a collapsed building following an explosion in Idlib, in April 2019. Omar Haj Kadour/AFP/Getty Images
Orient Net
The United Nations envoys in Middle East hot spots urged all warring parties on Saturday to translate Secretary-General Antonio Guterres´ appeal for immediate ceasefires to tackle the coronavirus pandemic into concrete actions aimed at ending hostilities.
The envoys for Syria, Yemen, Lebanon, Iraq, and the Israeli-Palestinian conflict stressed that solidarity is required to face the challenge of COVID-19 and this cannot happen "if the guns of war and conflict are not silenced."
They said "many parties have responded positively" to the secretary-general´s March 23 appeal but stressed the need for stepped-up action, stressing that COVID-19 has compounded the suffering of people caught up in Mideast conflicts.
"At a time like this, partisanship and narrow interests must yield to the greater cause and the good of the people," their appeal said. "That is why we echo the secretary-general in calling on all parties in the Middle East to work with the UN so we can "focus on the true fight of our lives" which is COVID-19.
The UN envoys called on all parties to conflicts to engage without preconditions in negotiations to immediately halt hostilities, to sustain existing ceasefires, and to achieve "longer-term resolutions to the persistent conflicts across the region."
They also urged all feuding parties "to reach out across conflict lines and cooperate locally, regionally and globally to stop the rapid spread of the virus," and to allow access for humanitarian aid and "humanitarian releases."
The appeal was signed by UN special envoy for Syria Geir Pedersen, UN special envoy for Yemen Martin Griffiths, UN Special Coordinator for the Middle East Peace Process Nickolay Mladenov, UN Special Coordinator for Lebanon Jan Kubis, and UN Special Representative for Iraq Jeanine Hennis-Plasschaert.
Guterres said on April 3 that warring parties in 11 countries had responded positively to his ceasefire appeal: Cameroon, the Central African Republic, Colombia, Libya, Myanmar, the Philippines, South Sudan, Sudan, Syria, Ukraine, and Yemen.
He told the UN Security Council Thursday in its first meeting on the coronavirus pandemic that he has been encouraged by support for his call for a global ceasefire to all conflicts from world leaders, regional partners, civil society activists, and religious leaders.
He also stressed that concerted international efforts, including by UN envoys, will be required to move from "good intentions to implementation," noting that "in many of the most critical situations, we have seen no let-up in fighting, and some conflicts have even intensified."
The Syrian Network for Human Rights (SNHR) said that 226,247 civilians, including 29,257 children and 16,021 women were killed between March 2011 until March 2020, with 91.36 percent of this total killed at the hands of the Assad-Russian alliance militias, adding that the disproportionately high percentage of the death toll among children and women, who comprise 18 percent of all victims, is another indicator that the Assad-Russian militias are deliberately targeting civilians.
The report notes that approximately 15.2 million people have been forcibly displaced since March 2011, of whom nine million have been displaced inside Syria, while nearly 6.2 million have been displaced outside Syria.
Based on Asharq Al-Awsat