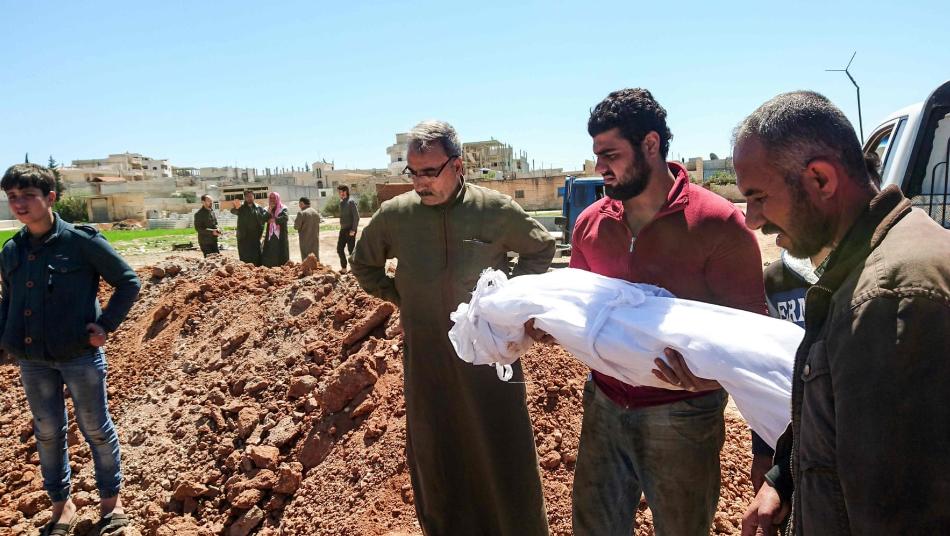 The chemical weapon attack on Khan Sheikhun, Syria in April 2017 killed 89 people, days after the one on Ltamenah. Photograph: Fadi Al-Halabi/AFP/Getty Images
__new_Underarticle_image_EN__
Orient Net
There is a temptation, to which some European governments and politicians are prey, to imagine that Syria’s war is over. It would, after all, be politically convenient if the millions of refugees languishing in Turkey and Jordan were to go home, rather than serve as a constant reminder of the EU’s chronic fear of migrants.
An end to the war would remove a prime cause of instability in the Levant and eastern Mediterranean region. Russia and Iranian regime would have less excuse to play games of geopolitical chance with civilian lives. Recep Tayyip Erdogan, Turkey’s president, would have less to complain about.
There was indeed a point, about 18 months ago, when it looked as if Syria’s dictator, Bashar al-Assad, was about to emerge triumphant. Opposition forces, abandoned by the US and their Gulf Arab backers, were fleeing north in disarray. There was talk in Italy of restoring diplomatic relations with Damascus.
But instead of the expected, decisive offensive, Russia cut a deal with Turkey to create a demilitarised zone in the north-western province of Idlib. Hundreds of thousands of displaced civilians took refuge there. When violence resumed last year, Idlib became a symbol both of resistance and extreme regime brutality.
Idlib is the subject of another ceasefire. For now, it remains beyond the regime’s grip; the tyrant in Damascus has not yet won. This is important, in terms of shaping perceptions, because last week brought another forceful reminder of why the world must not concede the victory Assad craves.
For the first time since the war began in 2011, the intergovernmental Organisation for the Prohibition of Chemical Weapons (OPCW), which oversees the 1997 Chemical Weapons Convention (CWC), directly accused the “highest levels” of Syria’s military, and by implication Assad himself, of ordering illegal chemical weapons attacks.
The attacks in question took place in the rebel-held village of Ltamenah, in northern Syria, in March 2017. On two occasions, Assad fighter jets dropped sarin gas, a nerve agent, making dozens ill. In another attack, a helicopter dropped a cylinder containing chlorine through the roof of the hospital.
__new_in_first_article1__
The OPCW has frequently ascertained illegal use of chemical weapons in Syria, but never before has it assigned blame or named the culprits. Last week’s comprehensive report based its findings on witness testimony, medical records and satellite imagery.
It was completed despite the refusal of the Assad regime to co-operate and a ban on investigators visiting the village. Russia has often hindered the OPCW’s work, too, not least through the repeated use of its UN security council veto and cynical disinformation campaigns.
Only days after the Ltamenah attacks, another regime chemical weapons assault on a nearby town, Khan Sheikhun, killed 89 people. The atrocity prompted the US to fire cruise missiles at military sites. But the strikes did not stop Assad launching more chemical attacks.
The OPCW’s detailed, factual proofs have finally put Assad on the spot. While similar, additional investigations are in train, this report as it stands is sufficient to warrant swift action by the UN and the CWC’s 193 state parties to bring the accused to book and exact justice for their crimes.
Given past form, the chances this will happen soon or at all are slim. Predictably, the US welcomed the report and took the opportunity to criticise Russia and Iranian regime. The EU said it might consider additional sanctions. And the regime flatly rejected the findings, calling them “falsified and fabricated”. No change there.
It would be nice to be wrong. Perhaps the international community, having ducked its responsibilities for so long, will at last summon the will to put the regime’s butchers on trial, in absentia if need be, for Ltamenah and the many other war crimes they have committed. Assad must not be allowed to win.
Based on the Guardian