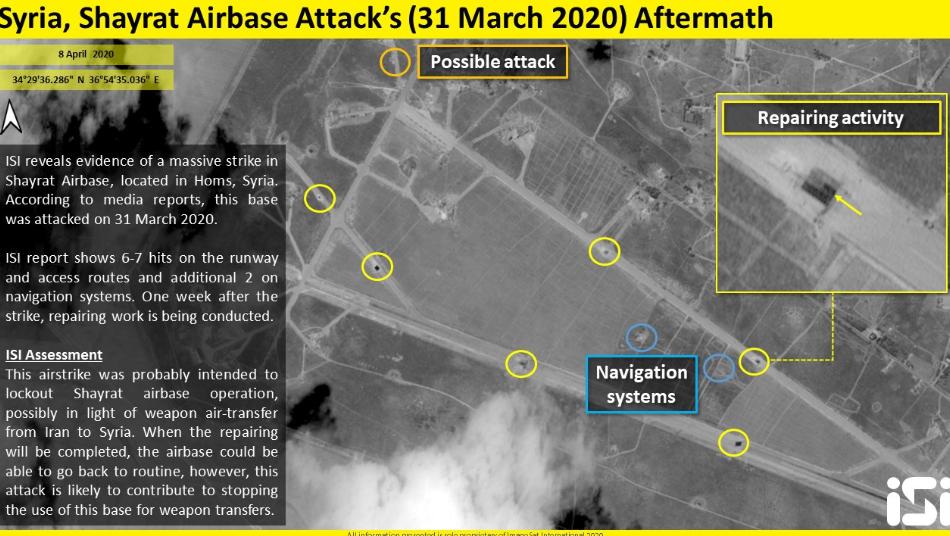 ISI Photo
Orient Net
Satellite images revealed damage to a key Assad regime airbase on Wednesday (April 8). The site was struck on March 31.
ImageSat International, which published the images, noted that it had revealed “evidence of a massive strike in Shayrat Airbase, located in Homs, Syria.” No country has claimed responsibility. Assad regime’s SANA blamed Israel and claimed Assad air defense downed numerous incoming missiles on the night of the attack.
ImageSat International says that their report “shows 6-7 hits on the runway and access routes and additional two on navigation systems.” The Assad regime militiamen or their allies who may use the runaway are already repairing it. The images were produced on April 8 and published the next day.
The airstrikes were probably intended to lockout Shayrat airbase operations, ISI notes. This would interdict weapons transfers from Iran to Syria.
The Shayrat attack may contribute to stopping the use of this base for weapons transfers, the ISI report notes. The airport is laid out with two runways at angles shaped like a giant “V,” and both seem cratered.