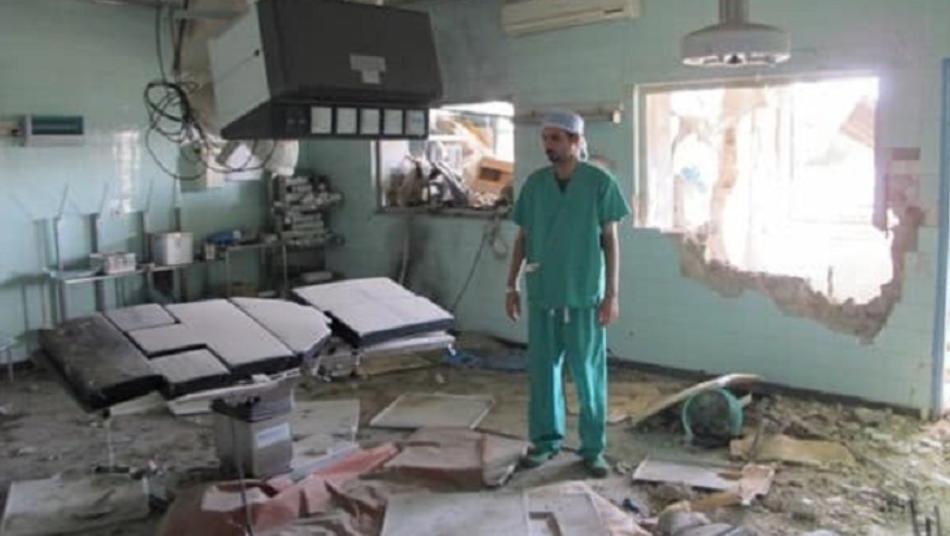 File Photo
A UN investigation found it "highly probable" that the Assad regime or its allies were responsible for attacks on four civilian facilities in the last opposition stronghold in the northwest in 2019 - a school, a health care center, a hospital and a child care facility.
The investigators said it is "plausible" that an attack on a second health center was also carried out by the Assad regime or its allies.
A summary of the 185-page confidential report by a board of inquiry appointed by UN Secretary-General Antonio Guterres was released Monday. It was formed to investigate incidents in Syria's northwest after Russia and Turkey agreed to establish a "de-escalation zone" in Idlib on Sept. 17, 2018.
Guterres said in a letter accompanying the report that the Assad regime did not respond to repeated requests to visit the country.
Noting the findings, he said, "I would emphasize in this connection that a board of inquiry is not a judicial body or court of law: It does not make legal findings or consider questions of legal liability or legal responsibility."
When Guterres announced the board´s three members in September, he said he was initiating the investigation after claims, especially from human rights and humanitarian groups, that civilian facilities were being targeted despite their coordinates being given to the Assad military and Russia a close ally of Assad regime.
The four attacks in which the board said it was "highly probable" that Assad regime or its allies were responsible involved:
Martyr Akram Ali Ibrahim Al-Ahmad Secondary School in Madiq Castle in Hama governorate on April 28, 2019, which was not on the UN "de-confliction" list. The board concluded the school was hit from the air by a fixed-wing aircraft. Nobody was killed or injured.
__new_in_first_article1__
-Rakaya Primary Health Care Center in Rakaya Sijneh in Idlib on May 3, 2019. The UN humanitarian office, OCHA, transmitted de-confliction information to Russia in January 2019. The board said it was "highly probable" a barrel bomb was dropped by a rotary-wing aircraft. A volunteer and others assisting a pregnant woman with her delivery were affected by the blast, but did not sustain any injuries.
Kafr Nobol Surgical Hospital in Kafr Nobol in Idlib on July 4, 2019. OCHA transmitted de-confliction information to Russia in February 2018. The hospital was functioning normally, with about 30 staff members, some patients and their companions, when intense airstrikes began. No one was killed or injured, but the hospital was damaged and had to close for several days.
Ariha Protection Center for children in Ariha in Idlib on July 28, 2019. OCHA transmitted de-confliction information to Russia in September 2018. Airstrikes on July 27 and July 28 struck near the building, and an explosion in front of the center collapsed its facade and destroyed much of the inside. A staff member who had stayed overnight was hit by falling rubble and had minor injuries.
The fifth incident involved the Kafr Nabutha Primary Health Care Center and Surgical Unit in Kafr Nabutha in Hama, which served an area of about 30,000 people. OCHA had sent de-confliction information to Russia in March 2018. The Assad regime and its allies launched an offensive in the area around April 27, and the center was damaged, most probably on May 1 and May 7, but no one was killed or injured because it had been evacuated and almost all civilians had fled the area. The board found it "plausible" that the damage was attributable to the Assad regime and its allies.
The board made a series of recommendations including saying "OCHA should directly notify all parties to the conflict, including the Assad regime, of the de-confliction information, unless for security reasons" a partner requests it not to.
Guterres said in his letter some issues the board raised are complex "including the question of which parties to a conflict should be given information intended to support de-confliction." To help determine how best to address the recommendations, Gutettes said he plans to appoint "a senior independent adviser with expertise and experience in this area," and was also open to receiving views from the UN´s 193 member states.
The board was headed by retired Nigerian Lt. Gen. Chikadibia Obiakor, a former military adviser in the UN peacekeeping department. The other members were former senior UN refugee official Janet Lim and former UN special representative on violence against children Marta Santos Pais.
Based on AP
قيم هذا المقال