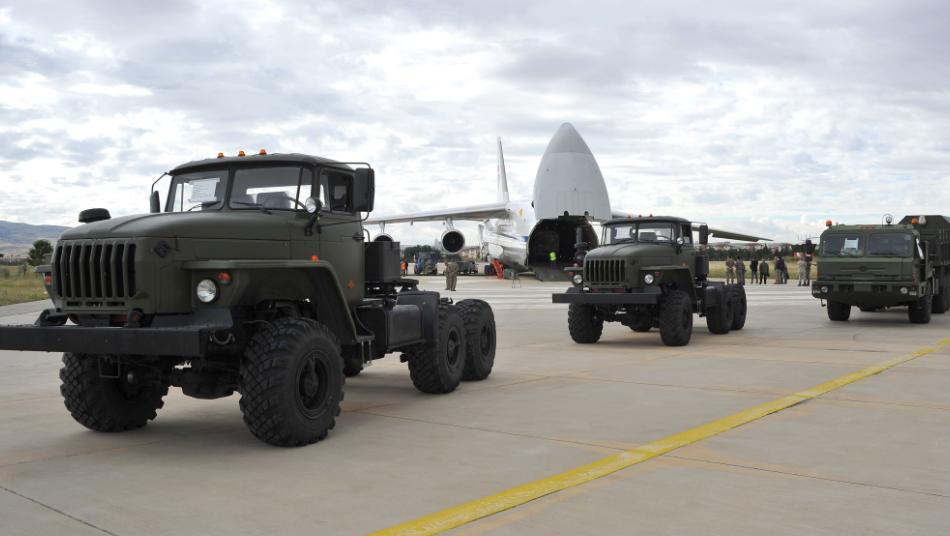 A Russian military cargo plane carrying S-400 missile defence system from Russia to the Akıncılar military airbase in Ankara. July 12, 2019. (AFP Photo)
Orient Net
The US is ready to provide an “assistance package” to Turkey in northwestern Syria’s Idlib if Ankara ejects S-400 missile systems, US ambassador to NATO Kay Bailey Hutchison has said.
Addressing reporters via teleconference on Wednesday, Hutchison said: “We hope that we can generate a package that can help Turkey, and I also hope that Turkey will not deploy the Russian missile defense system which blocks some potential support that we can provide to Turkey to fight against Syrian attacks,” in response to a question about the risk of clashes in Idlib and Turkey’s demand for support from both NATO and Washington, D.C.
While Hutchison did not give details about the content of the package, she also said: We want the area in Idlib where civilians got stuck in to be protected. Turkish soldiers also want to do that. The Assad regime kills innocent people and civilians with the support of Russia. This cannot be defended. Turkey is a victim of Russian and Assad aggressiveness. We hope that Turkey will eject the missile defense system stationed in the middle of Ankara and will give us the freedom of helping them to protect Syria and civilians.
The US special envoy for Syria James Jeffrey also said last month that there is no unanimity in Washington over support for Turkey in Syria's Idlib because of Ankara's purchase of Russian S-400 defense systems.
The Ankara-Moscow S-400 deal was inked in December 2017, when the parties signed a $2.5 billion agreement for two S-400 batteries. The S-400 is Russia's most advanced long-range anti-aircraft missile system in use since 2007.
The US argued that the system could be used by Russia to covertly obtain classified details on the jet and is incompatible with NATO systems.
Turkey, however, has countered that the S-400 would not be integrated into NATO systems and would not pose a threat to the alliance.
Based on DS