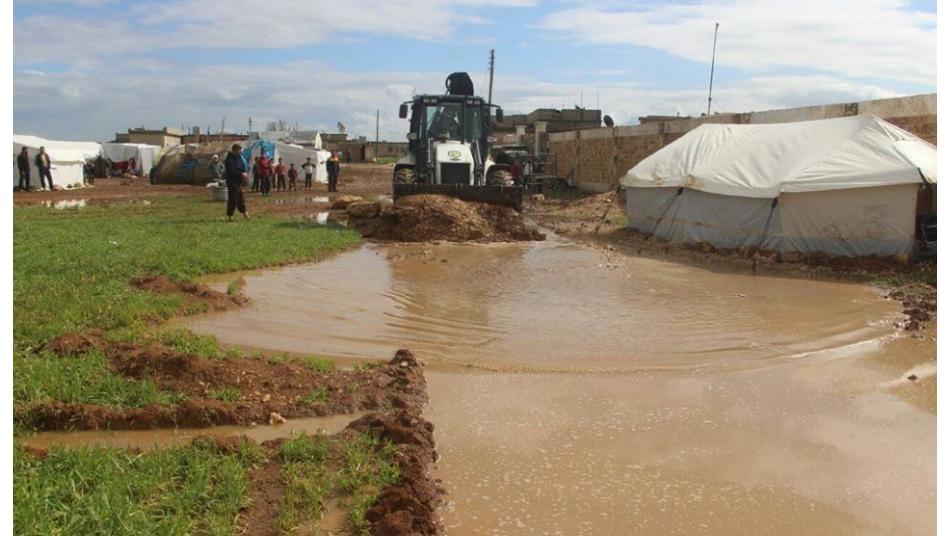 White Helmets teams offer help to Syrian IDPs in camps in northern Syria during ongoing rainstorm
Orient Net
A senior humanitarian adviser to the United Nations on Syria said on Thursday (April 2) that the current situation in the country is new and unlike any the team has dealt with over the last nine years due to the encroaching coronavirus.
“The current situation is new and unlike any we have dealt with in Syria for the last nine years.  All Syrians – and all those who provide (humanitarian) assistance – are at risk,” Najat Rochdi told the International Syria Support Group Humanitarian Task Force, headquartered in Geneva, which met via video-teleconference.
She urged members of the Group – which brings together the United Nations, the European Union, the Arab League and several Member States - to do all they can to ensure that help reaches Syrians across the country as soon as possible.
Throughout Syria, she said, efforts are being stepped up to prepare laboratories and isolation wards and to raise public awareness of COVID-19 mitigation and prevention measures.  Health facilities and selected intensive care units are being prepared and communities most at risk identified.
In its 1 April situation report, the World Health Organization (WHO) said there were 10 confirmed cases – all imported – and two fatalities, so far, in Syria.
Ms. Rochdi’s remarks echoed those made on Monday by Geir Pedersen, the Secretary-General’s Special Envoy for Syria, who told the Security Council that Syria – with a badly devastated healthcare system - is at “high risk” of being unable to contain the COVID-19 pandemic.
Participating in the video-teleconference, Mr. Pedersen reiterated his appeal for a complete and immediate ceasefire throughout Syria – one that would enable an all-out effort against the novel coronavirus and to spare all Syrians more suffering.
He expressed his readiness to work with all parties to the conflict - now in its tenth year.
The Special Envoy also saluted front-line humanitarian workers and doctors and nurses across Syria who are responding to COVID-19 at great risk to their own lives.
Emphasizing that Syria’s public health system is fragile and in need of considerable support to reinforce its capacity, Ms. Rochdi said that additional medical equipment, devices and supplies are urgently needed.
Millions of Syrian refugees hosted in neighbouring countries – such as Lebanon, Turkey and Jordan - also need assistance, she said, especially those living in overpopulated camps and informal settlements.
“It is absolutely critical to work cooperatively and move quickly”, she added, stressing the importance of keeping borders and internal crossing points open for the shipment of humanitarian workers and relief items.
For their part, donor countries – including those which have imposed sanctions – must ensure that exemptions for medical care be fully and immediately utilized and all obstacles put aside, as the crisis unfolds, she added.