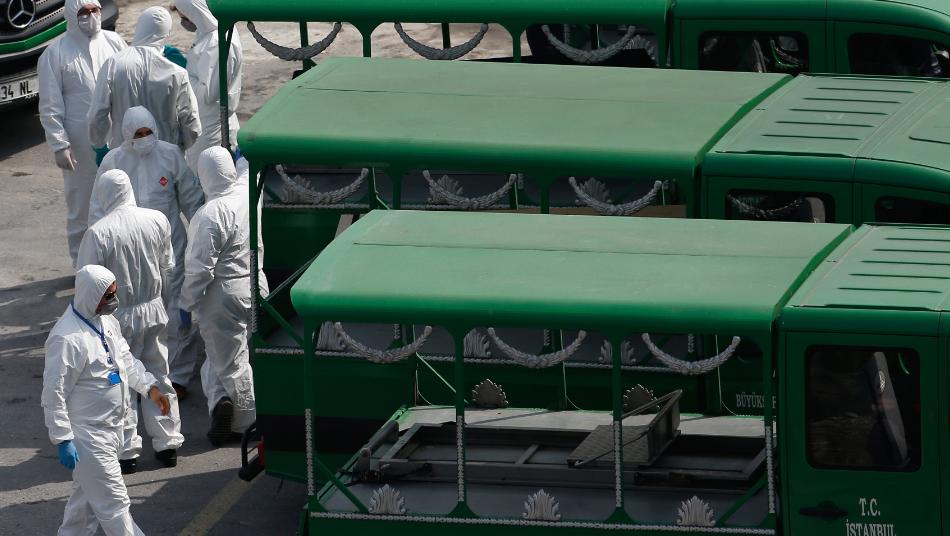 Officials wearing protective face masks and suits as a preventive measure against the spread of the coronavirus wait to load coffins of victims of Covid-19, to hearse trucks outside a morque in Istanbul, Monday, March 30, 2020. (AP Photo)
Orient Net
The death toll in Turkey from the new coronavirus rose to 214 after 46 more people died of the disease in the past 24 hours, the Health Ministry announced on Tuesday (March 31).
The total number of confirmed cases surged to 13,531, as another 2,704 people tested positive for the virus, according to the ministry data.
A total of 243 patients have recovered and been discharged from hospitals since the beginning of the outbreak, according to the data, which said 847 patients are being treated under intensive care.
Also, 15,422 tests were conducted in the past 24 hours and the total number of tests carried out so far rose to 92,403.
After first appearing in Wuhan, China, last December, the virus has spread to at least 179 countries and regions, according to the US-based Johns Hopkins University database.
The data shows the confirmed number of cases worldwide has surpassed 823,000, with the death toll over 40,600 and more than 174,000 recoveries.
Based on AA