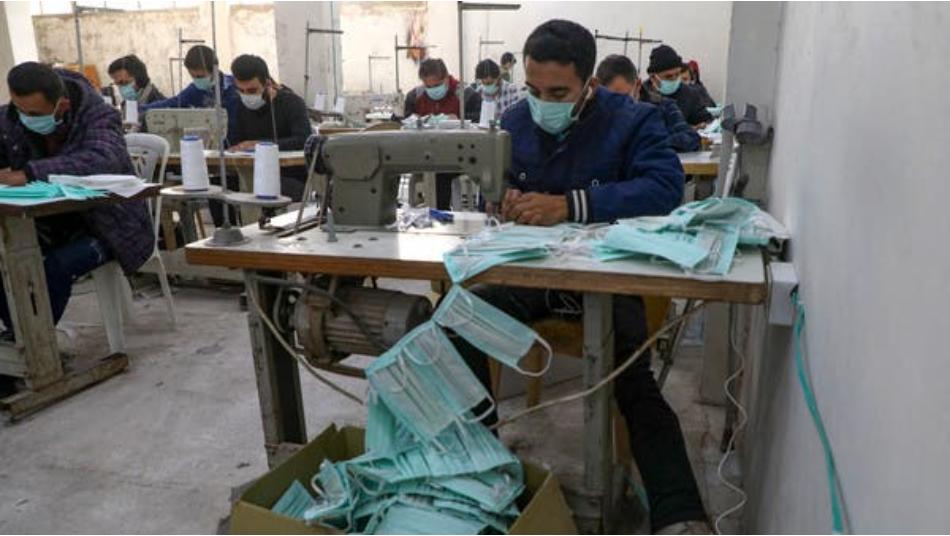 Volunteers gather in a sewing workshop to make protective face-masks in the northeastern city of Idlib, to be used as a means of protection against the novel coronavirus, on March 28, 2020. (AFP)
Orient Net
International Rescue Committee shared concerns for the world’s most vulnerable people living in Syria’s Idlib and other war zones worldwide amid the coronavirus pandemic.
In an interview with FRANCE 24, the president and CEO of the International Rescue Committee David Miliband shared his concerns for the world’s most vulnerable people - particularly the millions of refugees, internally displaced people and people living in war zones - amid the coronavirus pandemic.
The former British foreign minister expressed concern about a potentially "desperate situation" in war-torn Syria. "The danger in Idlib, where you have three and half million people packed into a densely populated area - a million people, as you rightly say, on the run since December - these are potentially desperate conditions in which very large numbers of people will get ill and very large numbers will lose their lives."
"We’ve seen how countries with advanced health and disaster management systems, across Europe and in the US, have struggled with the coronavirus," David Miliband, CEO of the International Rescue Committee, told FRANCE 24. "Imagine what it’s going to be like where there is no proper health system, where there is no public health system – those are the places where the International Rescue Committee works. They’re places where there are excessively high levels of population density, which we know is a major contributor to the spread of the disease. And they’re places where, because of acts of war or displacement, the infrastructure of support is very weak indeed."
Around the world, billions of people lack access to running water and soap, which are a key form of protection against the virus.
The International Rescue Committee chief continued: "We’ve been sounding the warning for some time now that although the recorded figures are low in Africa, in South Asia, in parts of the far east like Bangladesh and Myanmar, the actual situation is worse and there is a limited period of time to put in place the most basic hand-washing facilities, triaging facilities, isolation facilities, to make sure that this disease does not run rampant when it finally does arrive."
Miliband called on rich countries to provide emergency humanitarian aid to poorer countries. "They need to mobilise funds preemptively. We can’t wait to react. We’ve got to recognise that this is a disease of the connected world and it will affect every part of the world," he said.
Based on France 24