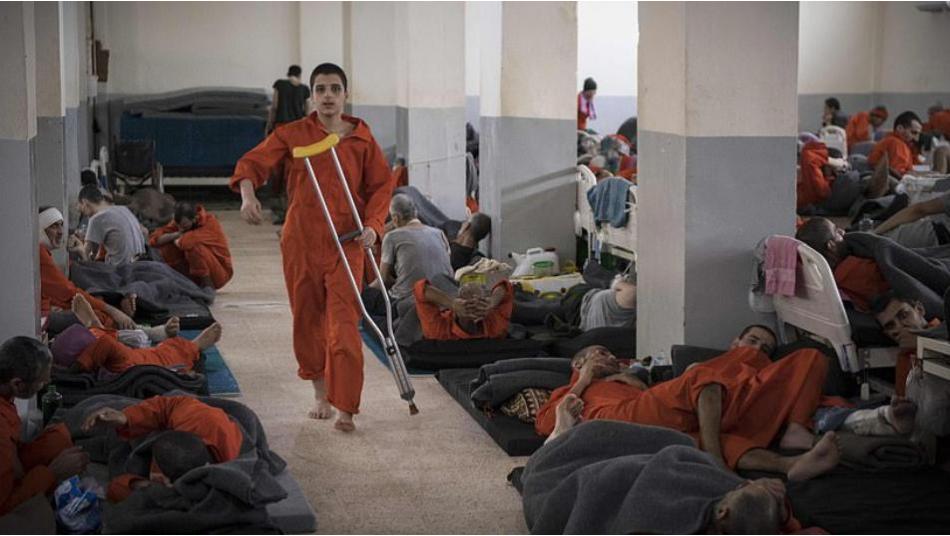 Men suspected of being affiliated with ISIS gather in a prison cell in northeastern Syrian city of Hasakeh on October 26 (AFP File Photo)
An unknown number of ISIS detainees escaped from a prison run by the Syrian Democratic Forces (SDF) in the northeast Syrian city of Hasaka on Sunday (March 29), Euphrates Post reported.
ISIS militiamen took complete control over the ground floor of Hasakeh prison, Mustafa Bali, head of the SDF press office, tweeted. “Some of them managed to escape and we are searching for them,” Bali wrote.
“The prisoners broke down the internal walls of the prison and removed the internal doors. The situation is tense inside the prison and the counter-terror forces are trying to control the situation. We have sent reinforcements and more counter-terror forces to the prison,” Bali wrote in a second tweet.
__new_in_first_article1__
Coalition warplanes flew low over Hasaka as SDF militiamen deployed in the city, according to local sources.
The international Coalition is assisting the SDF with aerial surveillance, “as they quell an uprising at Hasaka detention facility,” Coalition spokesperson US Army Colonel Myles Caggins tweeted. “The facility holds low-level ISIS members. The CJTFOIR [international Coalition] does not staff any detention camps in Syria,” Caggins wrote.
An SDF source told The Defense Post that prisoners began smashing security cameras after taking control of the ground floor.
There are some 10,000 suspected male ISIS members in makeshift SDF-run prisons across northeast Syria.
قيم هذا المقال