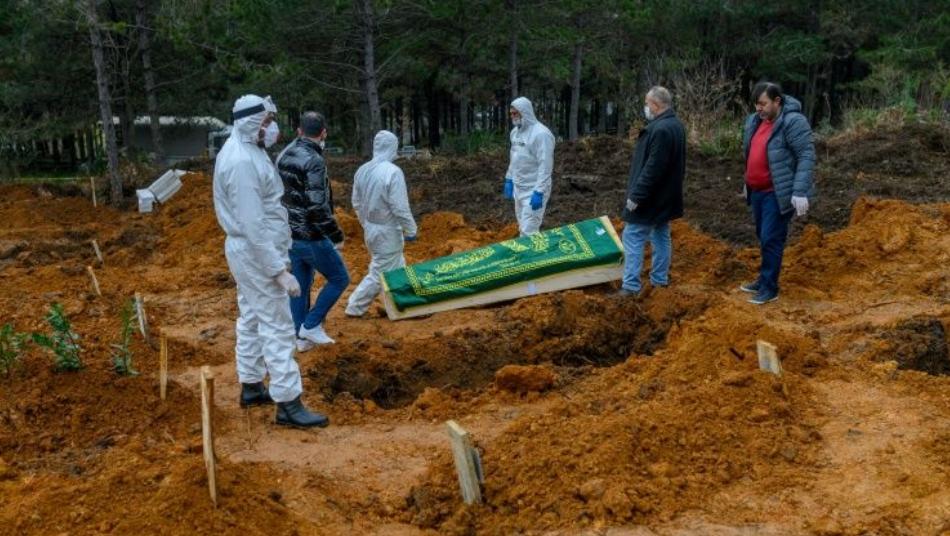 Officers and relatives prepare to bury a person who died from the coronavirus in Istanbul on March 27, at a cemetery opened by the government for victims of the COVID-19 pandemic BULENT KILIC AFP/File
__new_Underarticle_image_EN__
Orient Net
As many as 16 more people died of coronavirus in Turkey in the past 24 hours, the Turkish health minister said on Saturday (March 28), bringing the death toll to 108.
The total number of confirmed coronavirus cases surged to 7,402, as 1,704 more people tested positive for the virus in the past 24 hours, Fahrettin Koca announced on Twitter.
A total of 70 patients have recovered and been discharged from hospitals since the beginning of the outbreak, according to the announced data, which said 445 patients were being treated at intensive care units.
__new_in_first_article1__
Also, 7,641 tests were conducted in the past 24 hours and the number of overall tests carried out so far stood at 55,464.
After first appearing in Wuhan, China in December, the virus, officially known as COVID-19, has spread to at least 177 countries and regions, according to data compiled by US-based Johns Hopkins University.
More than 620,400 cases have been reported worldwide, with the death toll exceeding 28,700 and more than 135,700 recoveries.
Based on AA