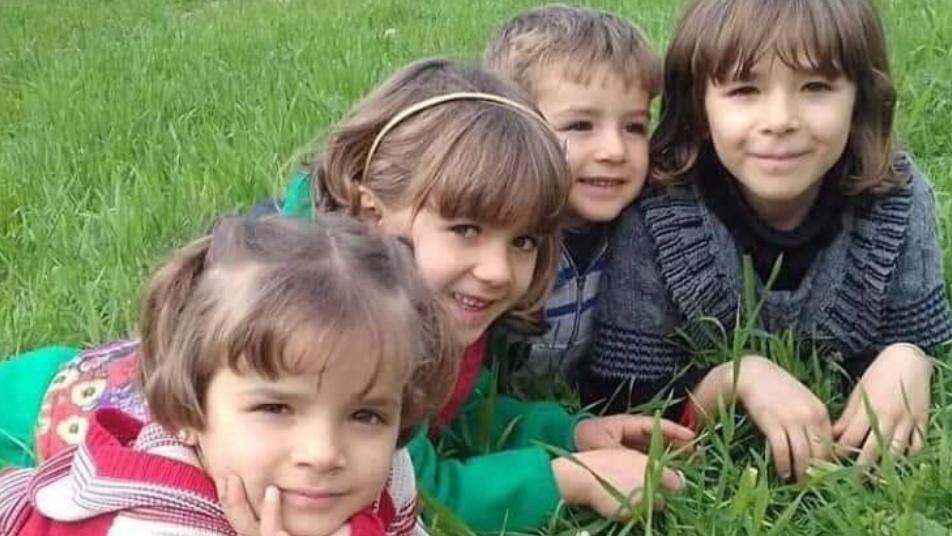 Photo of four Syrian brothers and sisters killed by Assad warplanes and helicopters that targeted on Friday night (July 5) civilian homes in Muhambal town, killing 13 civilians, including nine children.
Orient Net
The Syrian Network for Human Rights (SNHR) said in its report released on Friday (March 27) that Assad regime and Russia committed 77 massacres in Idlib in northwest Syria between April 26, 2019 and March 27, 2020.
The report further reveals that the 77 massacres resulted in the deaths of 647 civilians, including 224 children and 134 women. This means that 56 percent of all the victims were women and children, which is a very high proportion of the casualties, and a clear indication that civilian residents were specifically targeted in most of these massacres.
According to the report Russian forces committed a massacre of IDPs in Ma’aret Misreen town in Idlib prior to announcing a ceasefire agreement, noting that the double-tap airstrike policy used to kill paramedics and civilians indicates savagery and barbarism.
The 14-page report notes that the strategy of the Assad regime and its Russian ally in Syria is based on concluding agreements to establish the borders of the areas which they have already taken control of in order to prepare for attacks on new areas, noting that it is delusionary to trust that Russia and the Assad regime will sincerely commit to respecting any local, regional, or international agreement after the constant stream of violations they have committed, some of which amount to crimes against humanity.
This report includes a documentary record of the double-tap airstrike launched by fixed-wing warplanes which are believed to be Russian on a poultry farm sheltering IDPs in Ma’aret Misreen town in the northern suburbs of Idlib, and outlines the record of massacres committed by Assad-Russian alliance forces since April 26, 2019, until March 27, 2020.
The report documents a double-tap airstrike by fixed-wing Russian warplanes on Thursday, March 5, 2020, targeting a poultry farm where IDPs from Idlib and Aleppo suburbs were living. The poultry farm is located on the western outskirts of Ma’aret Misreen town. As the report states, the attack resulted in the deaths of 15 civilians, including two children and seven women, and injured around 19 others. The report notes that this massacre was committed in conjunction with consultations between the Turkish and Russian Presidents, which concluded to a ceasefire agreement, in reference to a desire to kill as many people as possible before the beginning of the ceasefire.
The report notes that the Ma’aret Misreen massacre is simply one in a long and violent series of massacres committed by Syrian-Russian alliance forces, with this massacre added to an extensive archive of massacres in Assad Russian-Syrian alliance militias practiced a double-tap airstrike policy with the aim of killing paramedics and Civil Defense personnel and inflicting the largest possible number of civilian victims, a tactic that once again indicates the Assad regime’s and its allies’ brutal mindset and underlines the fact that there has been no end to its criminality and Mafiosi behavior.
The report documents that 387 civilians, including 104 children and 62 women were killed and 15 massacres committed, all at the hands of Assad-Russian alliance militias in Idlib in northwest Syria between January 12, 2020, and March 27, 2020.
Assad Regime militias killed 174 civilians, including 40 children, 18 women, and committed four massacres, while Russian forces killed 213 civilians, including 64 children, 44 women, and committed 11 massacres.
The report further notes that displacement or forced displacement is a war crime in non-international armed conflicts when committed as part of a deliberate or widespread attack against the civilian population and may also be considered crimes against humanity.
The report further calls on the UN Security Council to pass a resolution to stabilize the ceasefire in Idlib and to include punitive measures for all violators of the cease-fire, to refer the Syrian issue to the International Criminal Court and to ensure that all those involved, including the Russian regime, are held accountable, having been implicated in committing war crimes.