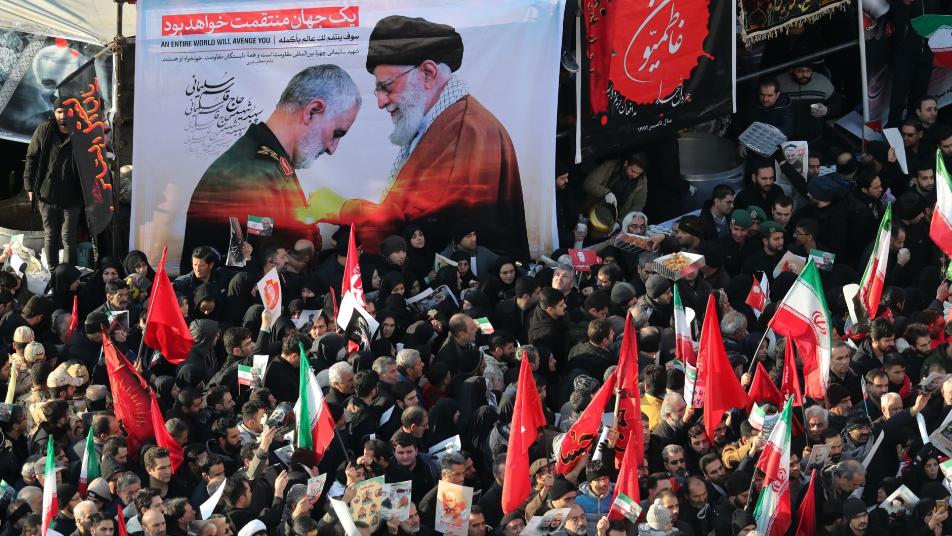 Thousands of Iranians on January 6 attend the funeral of Quds Force commander Qasem Soleimani, who was killed by a US air strike.
Orient Net
The United States says it has imposed sanctions against 20 companies based in Iran and Iraq, along with officials and other individuals there who are accused of supporting terrorist groups.
The US Treasury Department said on March 26 that the targeted “front companies, senior officials, and business associates…provide support to or act for or on behalf of” Iranian regime's Islamic Revolutionary Guards Corps (IRGC) and its branch for elite operations abroad, the Quds Force.
The individuals and entities are also accused of “transferring lethal aid to Iranian-backed terrorist militias in Iraq such as Kata’ib Hizballah (KH) and Asa’ib Ahl al-Haq (AAH),” the Treasury Department said.
Among other activities, the companies and individuals were said to be involved in smuggling weapons to Yemen, selling US-blacklisted Iranian oil to the Assad regime promoting propaganda efforts in Iraq, and intimidating Iraqi politicians.
The sanctions freeze any US-held assets of those designated and bar Americans from doing business with them.
Treasury Secretary Steven Mnuchin said Iran “employs a web of front companies to fund terrorist groups across the region, siphoning resources away from the Iranian people and prioritizing terrorist proxies over the basic needs of its people.”
The targeted entities and individuals include the Reconstruction Organization of the Holy Shrines in Iraq, which the US Treasury Department described as an organization based in Iran and Iraq that is controlled by the Quds Force.
Also targeted by the sanctions is that organization's executive chairman, Mohammad Jalal Maab.
Maab, an Iranian citizen from the town of Kerman, was appointed to the post in 2019 by Qasem Soleimani, the IRGC's Quds Force commander who was killed by a US air strike in Baghdad in early January.
Based on RFE