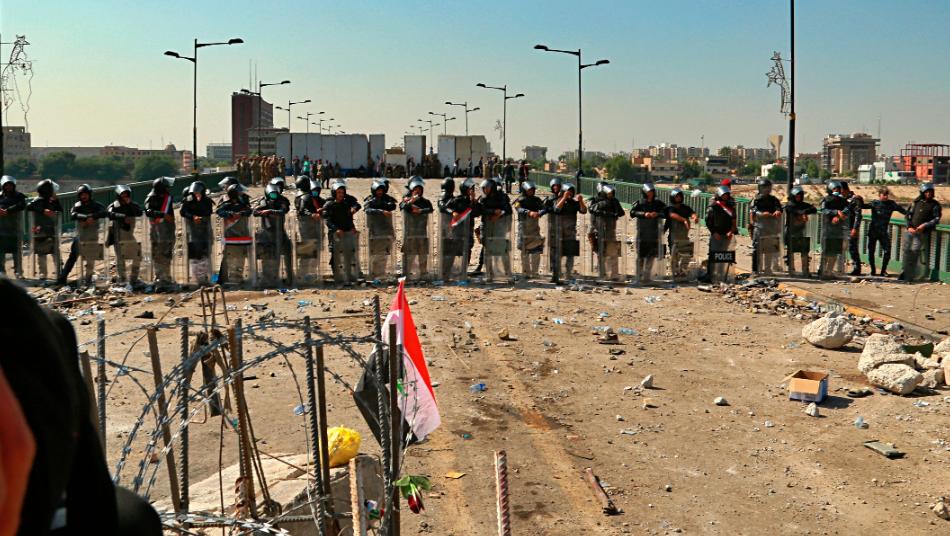 Security forces close the bridge leading to the Green Zone during a demonstration in Baghdad, Iraq, Oct. 26, 2019. (AP Photo)
Orient Net
Two rockets slammed into the Iraqi capital's high-security Green Zone early Thursday (March 26), hours before US-led forces were set to pull out of a second base in the country.
Some 7,500 troops are in Iraq as part of the US-led coalition helping local troops fight jihadist remnants, but those numbers are being significantly drawn down this month.
The alliance is temporarily bringing some trainers home as a precautionary measure against the coronavirus pandemic and is also leaving other Iraqi bases altogether.
Those bases and foreign embassies, particularly the American mission, have been targeted in more than two dozen rocket attacks since late October that have prompted fears of a proxy war on Iraqi soil.
Before dawn on Thursday, two rockets punched into an empty square near an Iraqi security headquarters in the Green Zone, where government buildings and foreign embassies are based, the Iraqi security forces said in a statement.
An Iraqi security source told AFP the intended target appeared to be the US embassy, a sprawling compound a few hundred metres further south on the banks of the Tigris.
Sirens could be heard going off shortly afterwards in the Green Zone.
There were no reports of casualties, but other attacks have been deadly.
Earlier this month, two US military personnel and a British soldier were killed in a rocket attack on the Taji airbase further north, which was hit again two days later.
The 5,200 US troops stationed across Iraqi bases make up the bulk of the coalition force helping hunt down ISIS group sleeper cells across the country.
Around 300 coalition troops left the western Qaim base in mid-March, handing it over in full to Iraqi troops.
On Thursday, more troops were set to leave the northern Qayyarah air base, where US-led troops in 2017 had helped Iraqis plan out the fight against IS in nearby Mosul.
Based on AFP