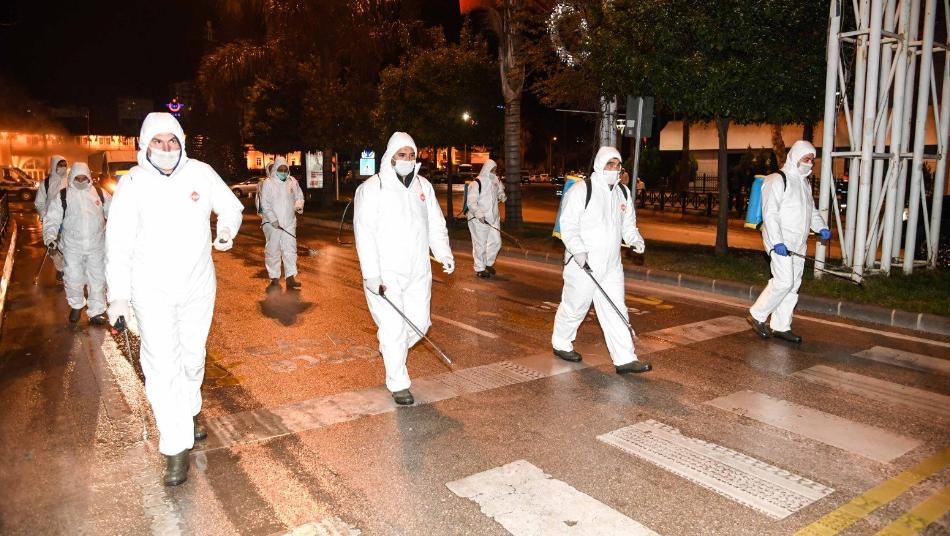 Workers disinfect streets in southern Adana province. (AA Photo)
Orient Net
The number of coronavirus patients in Turkey increased by 561 on Wednesday (March 25), taking the total number of infections to 2,433, while the death toll topped 59.
Health Minister Fahrettin Koca announced the figures with a bit of a warning, saying that “precautions bind us to life.”
“Some 5,035 tests have been conducted in the last 24 hours, 561 of which returned positive,” Koca said. “15 of our patients have passed away,” he added.
“Number cannot explain the grief of loss or anxiety. Let’s try to live with zero risks,” he stated.
Turkey has so far conducted nearly 28,000 tests.
President Recep Tayyip Erdogan said the country was monitoring a further 53,000 people at their homes and 8,554 others in hospitals.
The novel coronavirus first emerged in Wuhan, China, last December and has since spread to at least 169 countries and regions, according to data compiled by the US-based Johns Hopkins University.
More than 400,000 confirmed cases have been recorded worldwide with the death toll surpassing 20,000, while over 100,000 people have recovered. The World Health Organization has declared the outbreak a pandemic.
Despite the rising number of cases, most who become infected suffer only mild symptoms and recover.
Based on AA