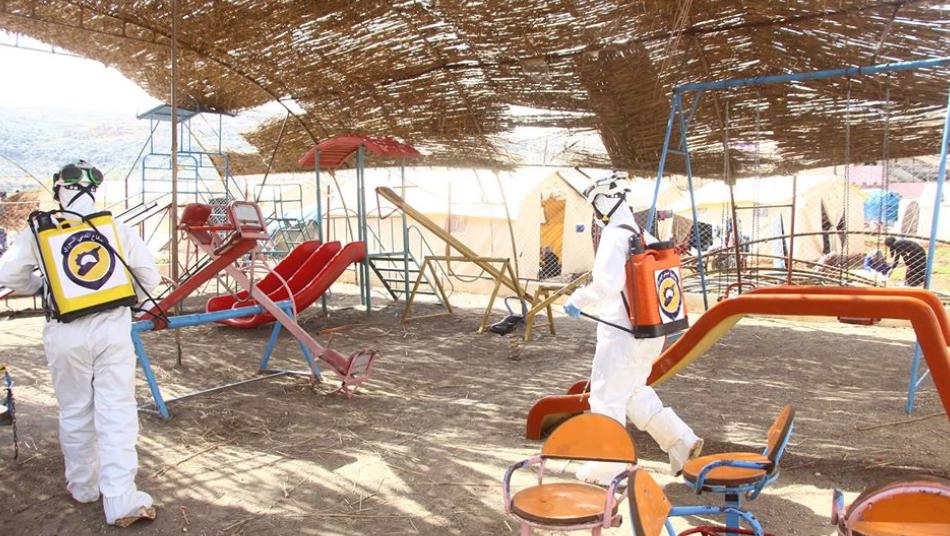 White Helmets Photo
__new_Underarticle_image_EN__
Orient Net
The White Helmets civil defense group is struggling to combat the spread of the coronavirus in northwestern Syria’s Idlib where regime attacks have decimated the health sector.
“Russian and regime's immoral and inhumane campaigns against Syrians driving them into inhospitable tent life have put more than 4 million civilians at risk of the impending disaster of the spread of coronavirus in northwestern Syria,” the White Helmets wrote Tuesday on Twitter.
Together with the local nongovernmental organization Violet Organization, civil defense teams have conducted disinfection works in public buildings, schools and hospitals in Idlib's city center.
The head of the Violet team, Abdulbaki el-Marri, told Anadolu Agency (AA) that the organization has increased measures against the coronavirus, while efforts of disinfection and first aid continue.
“We conducted awareness-raising activities,” Marri stated while one of the volunteers, Firas Halifa, said not enough test kits for the virus were available in Idlib.
__new_in_first_article1__
Damaged health infrastructure and massive displacement due to attacks by the regime and Russia make potential containment measures in the region a nearly impossible task.
Years-long sieges caused the deterioration of the physical health of many people, who have suffered malnutrition and widespread poverty. Another risk is that people often live in overcrowded places and camps – ideal for the spread of the virus. The camps are generally in poor conditions with a lack of access to water, hygiene, medical aid and food.
“In conjunction with the preventive disinfection operations against the coronavirus, the White Helmets teams are visiting people in camps and various towns to provide medical guidelines on prevention to increase societal awareness among civilians about the virus,” the White Helmets stated.
The risk of an outbreak is especially high and most alarming in Syria's northwest, where some 3 million people are trapped in a shrinking opposition bastion battered by months of bombardment, especially in Idlib. With close to a million people displaced since December by a Russian-backed regime offensive on the Idlib region, overcrowded settlements are teeming with fresh arrivals, and many of the displaced are forced to sleep in freezing temperatures in open spaces.
Based on DS