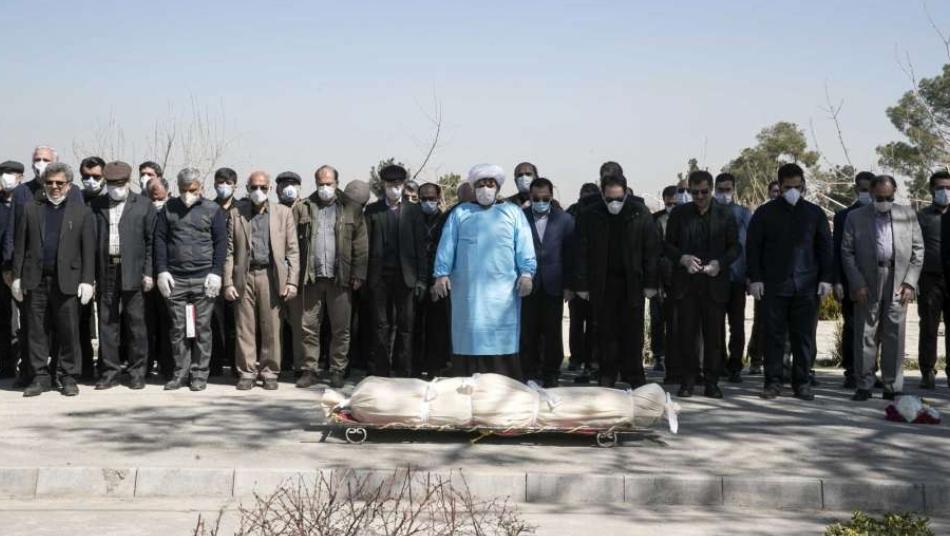 Mourners wearing face masks and gloves carry the body of former politburo official in the Revolutionary Guard Farzad Tazari, who died Monday.Tehran, Iran, Tuesday, March 10, 2020. (Mahmood Hosseini/Tasnim News Agency via AP)
Orient Net
Iranian regime on Tuesday (March 24) announced 122 new deaths from the novel coronavirus, raising the official toll to 1,934 in one of the world's worst hit countries.
Health ministry spokesman Kianoush Jahanpour said a record 1,762 new cases have been confirmed in Iran over the past 24 hours and 24,811 people are now known to have been infected.
Iran has the fourth highest official death toll from the coronavirus after Italy, China and Spain but, unlike those countries, it has yet to impose any lockdown on its citizens.
On the contrary, the country is in the midst of the two-week Persian New Year holiday when the country's roads fill with people visiting family.
Despite the authorities' appeals for people to stay home and the closure of shopping and leisure centres, many people have taken to the roads as usual this year.
Jahanpour announced that when government offices reopen on Tuesday, many civil servants will be working from home.
"Only around a third of government staff are authorised to work in the office and only for administrative tasks vital to the public," he said, adding that all offices would practise "social distancing".
Based on AFP