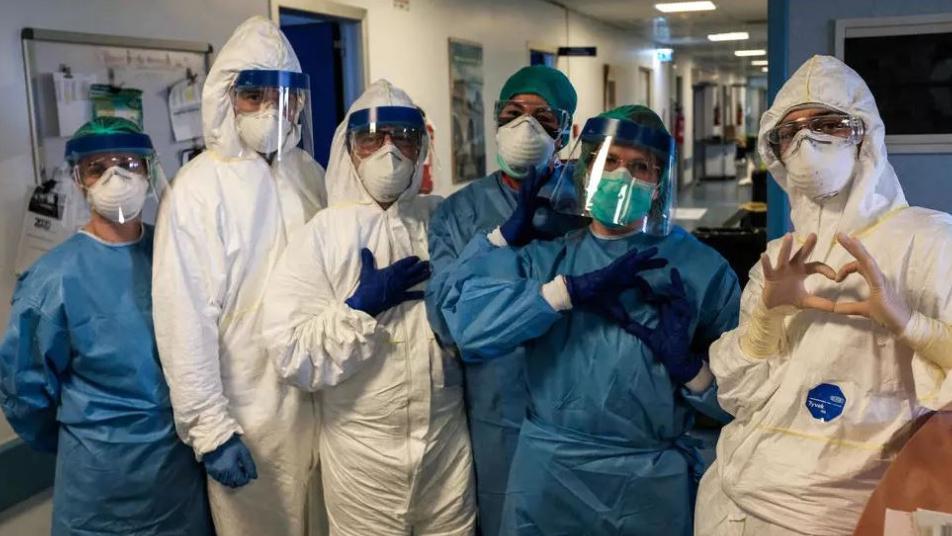 A group of nurses wearing protective gear pose for a group photo prior to their night shift on March 13, 2020 at the Cremona hospital, southeast of Milan, Lombardy. AFP - PAOLO MIRANDA
Orient Net
Nearly 1 billion people around the world were confined to their homes Sunday (March 22) as US states implemented stay-at-home orders similar to those in Europe, and as deaths from the global coronavirus pandemic topped 13,000.
The worldwide death toll from coronavirus on Sunday topped 13,000, while the number of confirmed cases also rose to nearly 307,300, according to US-based Johns Hopkins University.
Nearly 1 billion people are now confined to their homes in 35 countries, including 600 million hemmed in by mandatory government lockdown orders, according to an AFP tally.
The country with the greatest loss of life due to coronavirus is Italy, where 4,825 people have so far died, after eclipsing China earlier this week.
Mainland China, where the outbreak started last December, was second, with a total of 3,265 lives lost.
Iran had the third-highest death toll, with 1,556.
A total of 92,376 people have recovered from the virus so far, while COVID-19 has spread to 171 countries.
Turkey currently has 947 confirmed cases, and the death toll stands at 21.
Despite the rising number of cases, most people who contract the virus suffer only mild symptoms before making a recovery.
Based on AFP, AA