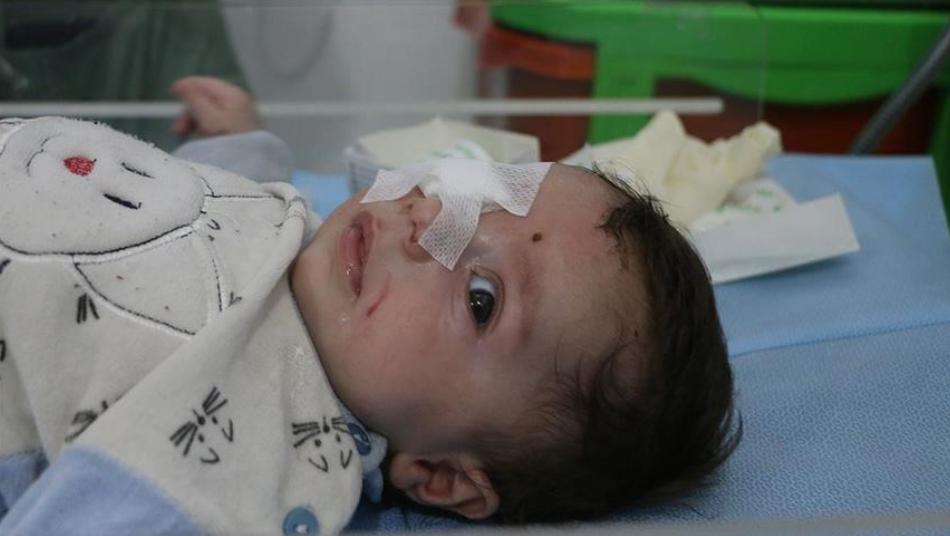 Orient Net
Abdulrahman Jabi, a 2-month-old Syrian baby, has lost his right eye in an attack by Assad regime militias and Russian warplanes in Idlib, northwestern Syria.
On March 5th, the Jabi family home was shelled by Assad-Russian alliance a few days before a new cease-fire was announced in the province – the latest one, after repeated violations of previous cease-fires.
On Thursday (March 5), Russian-Assad warplanes bombed a chicken farm used as a temporary accommodation center for IDPs in Maaret Masrin city and civilian homes in al-Bara city, killing 20 civilians, including seven women and two children and injuring 30 others, including women and children.
The baby’s eye was seriously injured as a result of shrapnel hitting his right eye.
Abdulrahman was taken to Bab al-Hawa hospital near the Turkish border in hopes of saving his eye, but the damage was too severe.
Although the baby has gotten a prosthetic eye, this will not erase the sadness of his family or the feelings he will face as he grows up.
Speaking to Anadolu Agency, Zahir Jabi, the baby's father, said that they are homeless and sought help to find a place to take shelter.
The father of three shared his tragic life memories, saying he lost his mother in a similar attack on the same home in the town of al-Janoudiyah five years ago, in the thick of Syria’s decade-long war.
The grieving father described the incident that took his son’s eye, saying: "I went out to bring wood for the stove. Rockets started to fall. One of them hit our house. I opened the door and our home was full of dust and smoke. I asked my wife, 'Are you ok?' and she said 'I'm fine but Abdulrahman's head is bleeding'." 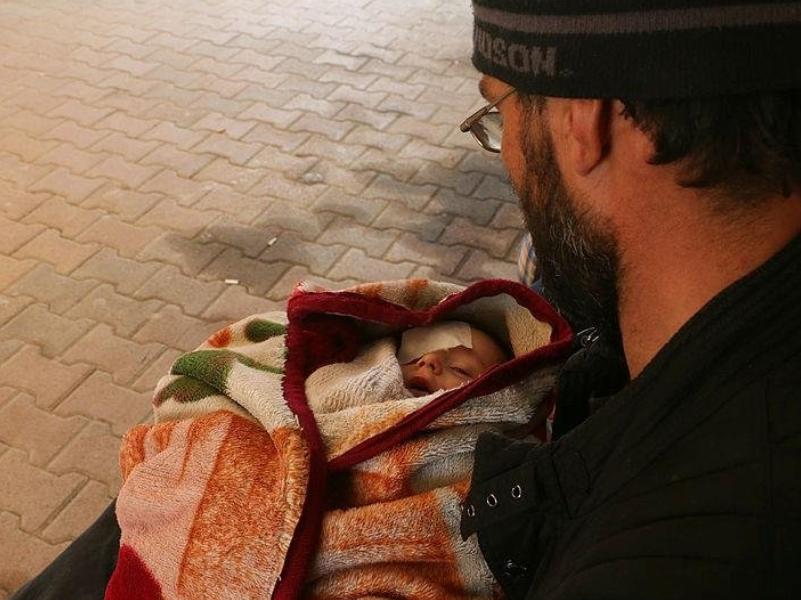 The father rushed to the nearest medical center, where they examined the baby and said he was not doing well, then transferred him to Bab al-Hawa Hospital at the Turkish border.
"The results of X-rays showed that my baby was wounded in the head, there was bleeding and two cracks in the skull," he remembered.
He went on to say that doctors stopped the bleeding, but nothing could be done to heal the eye.
"The doctors asked me to sign a paper about removing my child's eyes,” he said. “On the first day I couldn’t bring myself to sign it. I didn’t know what to do with my sadness, but on the other hand, at least he’s still alive, thank God."
Jabi said that words could not express his sadness for his little baby, now sentenced to go through life with a single eye.
"I pray to Allah to bless him with a good life," he said.
"Five years ago, my 60-year-old mother and now my 2-month-old son were victims of the attacks. Neither of them committed any crime. These attacks must come to an end," Jabi added.
Dr. Mahmut Kaddah, chief of medicine at the hospital which treated Abdurrahman, said: "The piece of shrapnel caused serious damage to his right eye. We couldn't save the baby's eye. Our ophthalmologists had to remove it.”
"A child dies every 10 hours as a result of the war," UNICEF said earlier this month.
Based on AA