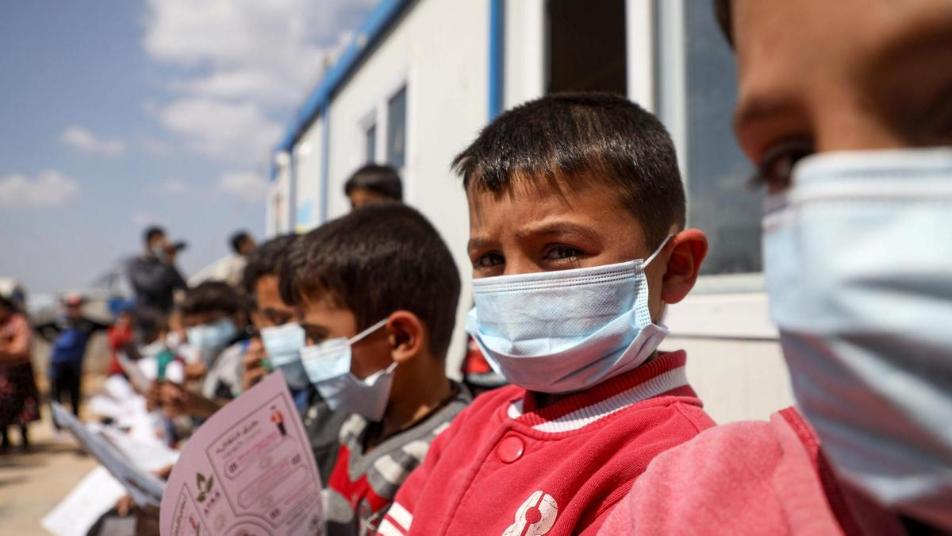 Displaced Syrian children and their parents attend a workshop on Covid-19 organised by medical volunteers at a camp near the town of Atme, close to Syria's border with Turkey, in Idlib province. AFP
Orient Net
The World Health Organization (WHO) said Tuesday (March 17) that it was extremely concerned about the impact of the coronavirus on displaced people in northwestern Syria.
WHO spokesman Christian Lindmeier said at a virtual UN briefing that although all its neighboring countries and territories had confirmed cases of COVID-19, Syria had not.
“The World Health Organization is extremely concerned about the impact COVID-19 may have on IDPs in the northwest [of Syria],” said Lindmeier.
At the same briefing, UN Refugee Agency spokesman Andrej Mahecic said by phone that the UNHCR “understands” there are 10 confirmed COVID-19 cases among refugees and the displaced in places such as Munich, Berlin and Heidelberg in Germany.
“This is a virus that does not discriminate,” said Mahecic, urging the mobilization of full medical facilities to vulnerable people in Germany.
Referring to Syria, Lindmeier said: “Refugees and migrants live under conditions that make them vulnerable to respiratory infections, overcrowded living conditions, physical and mental stress and deprivation due to lack of housing, food and clean water.”
The WHO spokesman said that an ongoing H1N1 outbreak in Syria and elsewhere could “unmask timely COVID-19 diagnoses and put an added strain on laboratories.”
He said that across Syria, only 64% of hospitals, and 52% of primary health care centers were fully functional by the end of 2019, while 70% of the health workforce had left the country.
At the UN briefing, Jens Laerke, a spokesman for the United Nations Office for the Coordination of Humanitarian Affairs said that his office, OCHA, was determined that crucial, lifesaving work for the world’s most vulnerable communities must be sustained.
“That means continuing focused coordination across the global humanitarian system, swift fund-raising to ensure critical programs have the resources they need and maintaining effective humanitarian operations, leaving no-one behind,” he said.
Based on AA