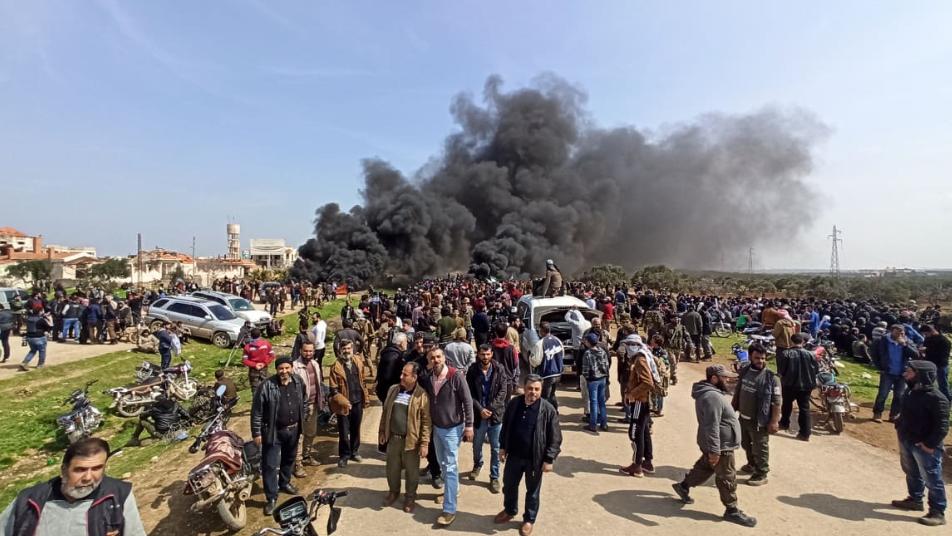 Orient Net
The United States rejects the farcical Russian defense ministry and media statements alleging that yesterday’s peaceful demonstrations in Idlib against Russian military patrols were organized by "terrorists trying to use civilians as a human shield," Special Representative for Syria, Ambassador James Jeffrey said in a statement published on Monday (March 16).
The reaction of Syrians to Russian military patrols in Idlib is not surprising. For nearly a year the Assad regime - with Russian and Iranian support - has conducted a reckless and ruthless military offensive in Idlib that has killed and wounded thousands of civilians and caused the displacement of nearly one million Syrians. Yesterday's demonstrators voiced their understandable objection to Russia's active involvement in the military assault on Idlib, Jeffrey added.
For five days, civilians organized sit-ins on the M4 road near the town of Neirab in Idlib countryside, refusing to conduct Russian patrols within the planned Russian-Turkish joint patrols on the M4 road.
The military solution the Assad regime hopes for, with support from Russia and Iranian regime, is not achievable and will not bring peace to Syria. Russia’s support for the depraved Assad regime has only further destabilized the country and region, bringing more loss and suffering to the Syrian people, the statement said.
The US is committed to working with our partners and allies in the international community to support the UN-led process in Geneva and UNSCR 2254 to bring about a peaceful resolution to the conflict in Syria. The Syrian people deserve to live in peace, free from airstrikes, chemical weapons attacks, barrel bombs, detention, torture, and starvation, Jeffrey concluded.