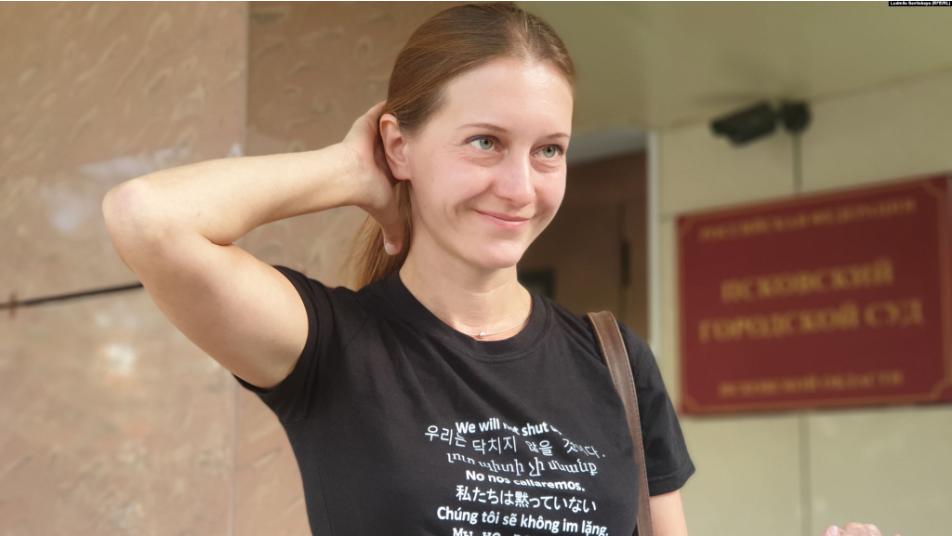 Svetlana Prokopyeva
Orient Net
Russian journalist Svetlana Prokopyeva has been formally charged with justifying terrorism in a case that has drawn criticism from rights and media watchdogs.
Prokopyeva, a freelance contributor for RFE/RL's Russian Service, said on Monday (March 16) she had been handed the indictment document at the prosecutor's office in Pskov.
She denies the charge, describing the criminal case against her as an attempt to "murder the freedom of speech" in Russia.
If found guilty, the journalist faces seven years in prison.
RFE/RL President Jamie Fly condemned Prokopyeva's indictment, saying that "the charges lack any merit, and have been brought instead in a cynical effort to silence an independent journalist."
"Independent journalists in Russia should be respected for their critical role in providing people with important news and information about issues they are facing, and not treated as criminals for doing their jobs," Fly added.
The charge against Prokopyeva stems from a November 2018 commentary she made for the Pskov affiliate of Ekho Moskvy in which she discussed a bombing that occurred the week before outside the offices of the Federal Security Service (FSB) in the far northern city of Arkhangelsk.
Russian media reported that the suspected bomber, a teenager who died in the incident, had posted statements on social media in which he accused the FSB of falsifying criminal cases.
In her commentary, Prokopyeva linked the teenager's statements to the political climate in Russia under President Vladimir Putin, suggesting that political activism in the country was severely restricted, leading people to despair.
In an open letter published by nearly a dozen independent Russian media outlets in October, Prokopyeva insisted that she "did not justify terrorism."
"I analyzed the reasons for a terrorist attack. I tried to understand why a young man, who should want to live, decided to commit this crime and suicide," Prokopyeva wrote.
"I consider this case to be just simple revenge on the part of the offended security agencies," she wrote. "In my article, I placed responsibility for the Arkhangelsk explosion on them. I wrote that a repressive state should expect such a reaction."
The case against Prokopyeva has been criticized by international media-freedom watchdogs such as Reporters Without Borders (RSF), the Committee to Protect Journalists, and the European Federation of Journalists.
Based on RFE