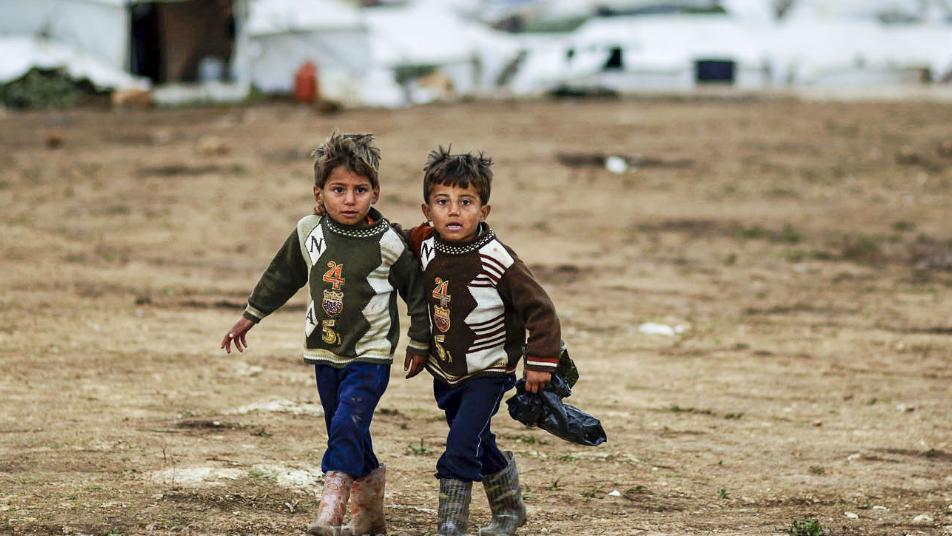 Children in the Rukban camp for displaced Syrians near the Jordanian border (File)
Orient Net
Displaced civilians in the Rukban camp in southeast Syria warn that they face exhaustion of food and supplies because of the tightening of an 18-month siege by Assad militias.
EA has obtained statements from the local council for the camp about the “the Assad, Iranian, and Russian militias” stepping up the cut-off of the camp in the past month: “Now only fresh air can enter the camp. The situation inside Rukban is tragic.”
The council claims that there are only two ovens in the camp, and that the only one in operation will run out of flour within days.
Rukban Camp has received no reassurances or promises from any party — humanitarian, international, United Nations — that this Humanitarian Crisis will be solved. We declare al-Rukban camp a humanitarian disaster area.
We demand [the international community] carry out your moral and humanitarian responsibilities by pressing this criminal militias to end the siege.
Rukban has about 13,000 residents, about 70% of them women and children. The camp, in a barren area near the Jordanian border, once held more than 50,000; however, many have been forcibly transferred back to Homs Province after the regime cut off the main route into the camp in September 2018.
The Assad regime has allowed only three aid shipments into the camp since January 2018. Russia has supported the siege with propaganda, disinformation, and pressure on the local council through meetings which demand the disbandment of the camp.
A source inside the camp warns that statement by UN officials of “thousands” of civilians wanting to return to Homs are false, despite the increased Russian-regime pressure for departures.
“The UN officials do not mention the arrests [of those who have returned to Homs at all,” the source says.
Residents in Rukban, activists, and aid workers say hundreds of men who have left Rukban have been taken from the Homs shelters and detained.
Those who have given way and returned to Homs have not been given the “reconciliation” promised by the regime. Ursula Mueller, the UN’s Assistant Secretary-General for Humanitarian Affairs, summarized to the Security Council on February 27, “These families are living under extremely difficult conditions. Almost all are living in makeshift tents. Many are struggling to meet their immediate food needs.”
Based on EA Worldview