Save the Children: Half of Idlib’s schools are damaged, destroyed 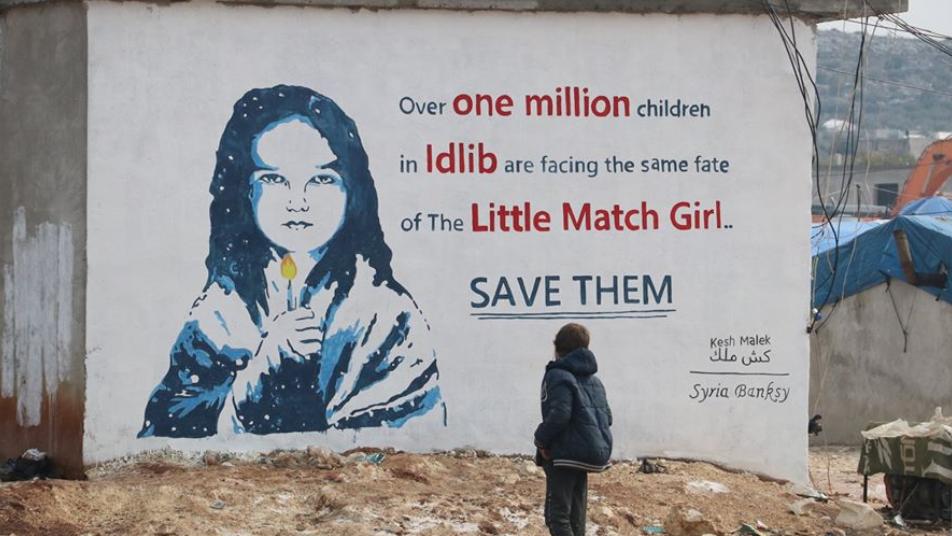 Orient Net
At least 217 schools were damaged or abandoned due to fighting during three months of bombardment in North West Syria. This rate represents more than two schools lost to the conflict each day from December 2019 to March 2020, Save the Children in a new briefing paper on Monday (March 16).
A year of conflict in the area has amounted to an intensive attack on the education and the futures of one and a half million children, the briefing paper added.
Today’s figures show that in total more than half of Idlib’s formal schools — 570 out of 1,062 — are now damaged, destroyed or in areas too dangerous for children to reach. A further 74 schools are currently being used as shelters for families escaping conflict.
As a result, each remaining functional classroom would need to accommodate to around 240 pupils for all school-age children in Idlib to go to school.
Dara, eight, was sheltering from the fighting in a school when it was hit by an attack on 25 February 2020. Save the Children partner Hurras was also supporting the school. At least three children were killed and many more injured.
Dara said, “A woman held us and started crying. Her sister lost her leg and fell. We were standing and suddenly the woman started screaming and crying because her children died.
“I started crying, calling for my siblings, but no one was answering. Then out of nowhere, my sister came running to me, barefoot and crying.
“I got injured in my leg here. I didn’t feel it when the shrapnel went at first, but then I started feeling the pain, I fainted and stopped understanding anything.”
Conflict in civilian areas over the last year has forced people to flee nearly half of Idlib province into increasingly inhumane conditions. Since the start of 2019, Save the Children and Hurras Network verified 92 incidents where schools in North West Syria have been hit by attacks.
Sonia Khush, Save the Children’s Syria Response Director, said:
“Schools should be off limits, even in the bitterest conflict. But time and again schools in Syria have been in the firing line.
“After nine years of brutal violence and broken promises, no one knows what will happen next. But for children in Idlib and across Syria to have the chance of building a better future it’s not enough for them to simply survive. It’s vital they continue to learn and go to school, even in the midst of this chaos. Each day a child is out of school makes it less likely they’ll be able to go back and catch up.
“A school provides more than education. It offers stability and routine that is crucial for children’s mental health and recovery after experiencing so much horror and loss.
“We need to ensure all schools are protected. And we need donors to increase funding to help children stay in education.”
On 25 February eight schools and two kindergartens were hit by attacks – the most in a single day in Idlib since at least the start of 2019. Most of these attacks were during class, reversing a recent pattern where educational facilities have largely been hit outside of school hours, according to Hurras Network. Since March 2019 there had been only one other verified attack while classes were taking place, which killed five children on 1st January 2020.
In response to the number of attacks on education, parents have asked Save the Children’s partners not open schools in certain areas because they are afraid of attracting violence. Instead, they have asked for education to be hidden away in sites like caves and basements or made harder to hit in mobile schools.
Wafaa, 12, and her family have been sheltering in an overcrowded camp for around a month after escaping the violence. Their home was hit by an air strike while Wafaa and her family were inside. They had to be pulled from the rubble. Wafaa’s school was also hit and two of her classmates were killed.
Wafaa said: “We were in class with the teacher then an airstrike hit. They had to take us out from underneath the school. Everyone started crying. There is nothing worse than this crisis.”
To stop the conflict robbing children of their education, Save the Children and its partner Shafak have turned four buses into brightly painted mobile classrooms. The aid agencies take school to some of the 575,000 displaced children like Wafaa at the heart of the crisis.
Wafaa said: “They’re teaching us everything. They’re teaching us how to read and write. The first step in life is that you need to learn, instead of wasting your whole life.”