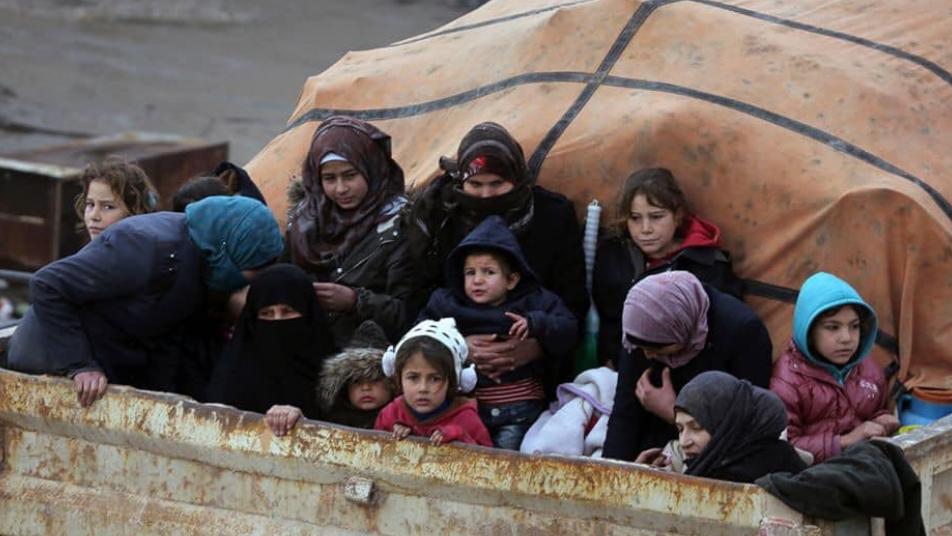 Assad regime has forcibly displaced 15.2 million Syrians since 2011
__new_Underarticle_image_EN__
Orient Net
The Syrian Network for Human Rights (SNHR) issued on Sunday (March 15) a report marking the nineth anniversary of the start of the Syrian revolution, which outlines the record of the most notable human rights violations committed by the main perpetrator parties to the conflict in Syria since March 2011 until March 2020.
The report notes that approximately 15.2 million people have been forcibly displaced since March 2011, of whom nine million have been displaced inside Syria, while nearly 6.2 million have been displaced outside Syria.
The report notes that 226,247 civilians, including 29,257 children and 16,021 women were killed since March 2011, with 91.36 percent of this total killed at the hands of the Assad-Russian alliance militias, adding that the disproportionately high percentage of the death toll among children and women, who comprise 18 percent of all victims, is another indicator that the Assad-Russian militias are deliberately targeting civilians.
The report further notes that at least 129,989 individuals are still detained or forcibly disappeared in the official and unofficial detention centers of the Assad regime until March 2020.
According to the report, at least 3,087 individuals are still detained or forcibly disappeared in the Syrian Democratic Forces’ prisons from as of March 2020.
The report documents that ISIS arrested at least 8,648 individuals since its establishment until March 2020, while at least 2,057 individuals are still detained or forcibly disappeared by Hay’at Tahrir al Sham arrested until March 2020.
__new_in_first_article1__
The report explains that Assad Regime militias have used various types and methods of torture against all detainees, noting that 14,221 individuals have died due to torture in the Assad regime’s prisons until March 2020.
The report further notes that Assad Regime militias have pursued a policy of imposing siege on areas under the control of factions of the Armed Opposition, preventing the access of food and medicine, resulting in the deaths of 920 civilians, including 405 children and 189 women (adult female) since March 2020.
The report reveals that SNHR has documented nearly 222 chemical weapon attacks in Syria since the first documented use of CWs in the country in December 2012, up to March 2020. 217 of these chemical attacks were carried out by the Assad regime, resulting in the deaths of 1,510 individuals.
The report further reveals that the Assad regime air force has dropped approximately 81,916 barrel bombs between the first documented use of this weapon on July 18, 2012 and March 2020.
The report also notes that in light of the global spread of the novel Coronavirus, known as COVID-19, the situation of the displaced Syrians is considered to be one of the most fragile situations in the world, further noting the potentially devastating impact of the spread of this virus on tens of thousands of detainees who are at risk of infection due to the poor health conditions in the regime’s detention centers.
As the report notes, the Assad-Russian-Iranian alliance forces are by far the largest cause of the mass forced displacements of Syrians.
The report recommends that the members of the Security Council stop using their veto to protect the Assad regime, which has committed hundreds of thousands of violations over the past eight years, many of which constitute crimes against humanity and war crimes.