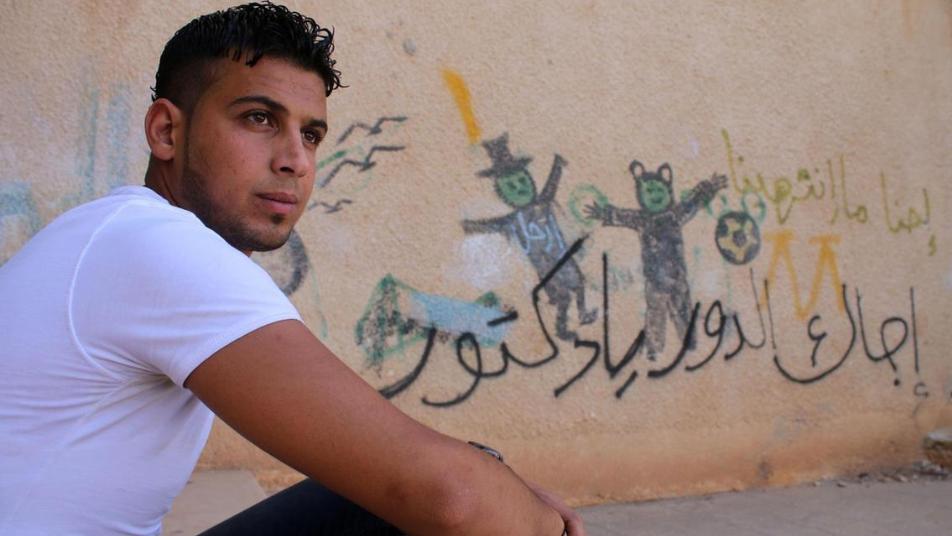 Moawiya Sayasina, was just 15 when he inscribed anti-Assad slogans in 2011, sits next to a graffiti drawn on the wall of a schoolyard reading in Arabic "Your turn, Doctor", in a opposition-held neighbourhood in the southern Syrian city of Daraa. Mohamad A
Orient Net
The war in Syria has been taking its toll on children for nine years – their lives forever marked by the conflict. Hundreds of thousands of children are now fighting to reclaim their futures. Human Rights Watch (HRW) said on Friday (March 13).
Human Rights Watch told some of their stories in the following statement:
When 15 boys were detained in Syria for scrawling anti-regime graffiti on walls in Daraa, a city in Southwest Syria, news of their arrest sparked protests. The protesters called not only for the release of the boys, but for greater political freedom, and railed against regime corruption.
When they were finally released, bruised and bloodied and talking about the torture they suffered, the boys’ stories helped fuel protests that were rapidly spreading across Syria.
Those boys, aged 10 to 15, were arrested in March 2011 and the protests for their release grew into the demonstrations and brutal repression that sparked the bloody war in Syria.
Now, children are still paying the price of war. In the northwestern province of Idlib alone, nearly 600,000 children have been forcibly displaced since December 2019 by the latest Assad-Russian joint military offensive in the province.
The United Nations reported that more than 1,700 civilians have been killed in northwestern Syria since last year, including more than 500 children, the vast majority by regime militias.
Thousands of children are fleeing to displacement camps every day. For many, it is the fifth or sixth time they have been forced from their homes, as they fled to Idlib from elsewhere in Syria. Now, pressed up against the Turkish border, there is nowhere safe for them to go.
Turkey has closed its border to those seeking safety, and in the displacement camps, humanitarian aid is utterly insufficient.
Unnecessary and sometimes cruel bureaucracy in regime-controlled Syria and countries where people seek safety stops hundreds of thousands of Syrian children from getting an education. Desperate parents sometimes even find themselves resorting to child marriage to try to ensure a future for their daughters.