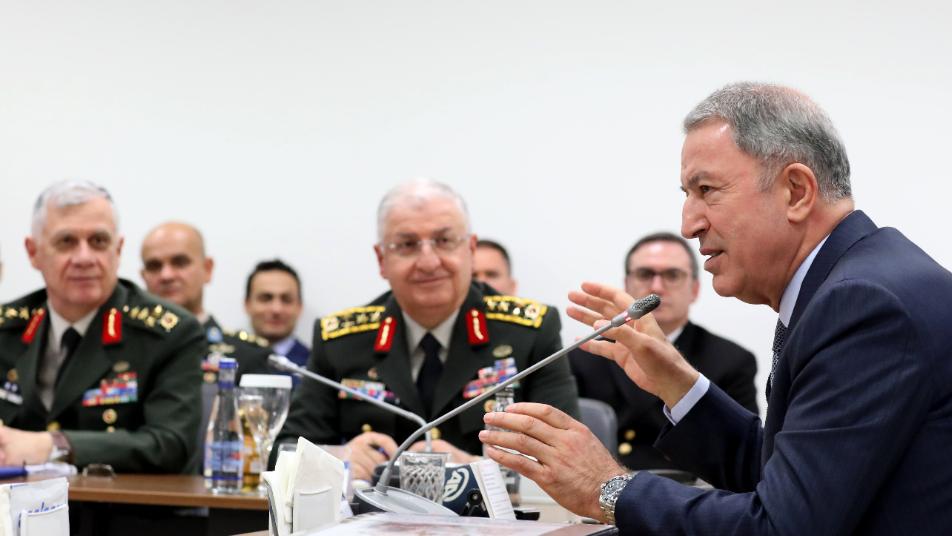 Defense Minister Hulusi Akar holds a meeting with high-level military officials on March 12, 2020. (AA Photo)
Orient Net
Turkish Defense Minister Hulusi Akar said Thursday (March 12) that meetings with the Russian military delegation continue and an agreement on the Idlib cease-fire was reached to a large extent, but warned that Turkey would retaliate in the case of a violation of the cease-fire.
"The meetings with the Russian delegation continue and an agreement was reached to a large extent. If the Idlib cease-fire is broken and attacks continue, we have said we will continue where we left off and hurt them, our friends are ready."
Rebuffing any claim that Turkey has withdrawn from the region of northwestern Syria, Hulusi Akar told reporters in the capital Ankara that "our elements maintain their presence."
He added: "Our forces have been ordered to act accordingly if the cease-fire is violated and attacks continue. Everyone is ready at any moment … We will continue to restart where we left off and hurt them [Assad regime militias]," Akar added.
After at least 34 Turkish soldiers were martyred last month in Idlib by Assad regime militias, Turkey retaliated on regime targets and launched Operation Spring Shield in the province to prevent further attacks on Syrian civilians and Turkish troops.
Based on AA, DS