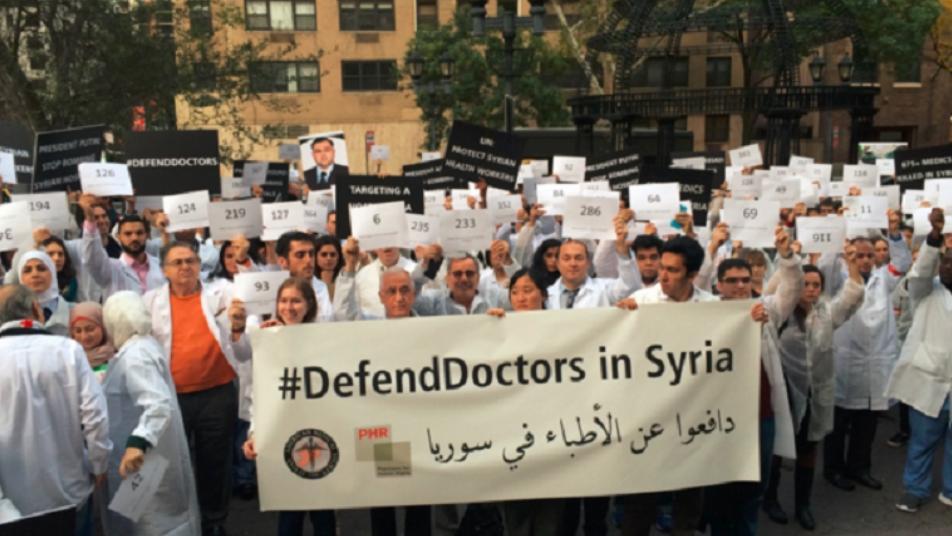 SAMS (File Photo)
Orient Net
At least 470 patients and health staff in Syria were killed in a total of 494 attacks on health facilities over the past four years, the World Health Organization (WHO) said.
In a report, the WHO condemned the attacks on health facilities, mostly in the country’s northwest.
“The data we can now reveal on attacks on health in Syria is a grim testament to a blatant disrespect for international humanitarian law and the lives of civilians and health workers,” said Richard Brennan, WHO‘s regional emergency director in the Eastern Mediterranean.
The WHO said the Syrian conflict has for years been one of the worst examples of violence affecting health care.
It said that intentionally attacking sites where the sick and wounded are treated -- to either restrict or deny civilians access to health care -- is prohibited under international humanitarian law.
Indiscriminate attacks in civilian areas can also result in damage to health care, reflecting a callous disregard for the lives and welfare of the most vulnerable, it added.
“What is troubling, is that we‘ve come to a point where attacks on health -- something the international community shouldn‘t tolerate -- are now taken for granted; something we have become accustomed to,” Brennan said.
He said that only two weeks ago, there were attacks on two hospitals in Idlib governorate, injuring four health workers, and temporarily suspending services.
Of the 494 attacks on health confirmed between 2016 and 2019, 68 percent or 337 attacks were recorded in Syria’s northwest, the WHO said.
“The data show that attacks on health in Syria peaked in 2016 and were lowest in 2019, likely due to the reduced size of the area where active fighting was taking place,” it said.
The UN health agency said the fact that the northwest -- Idlib, Aleppo, and Hama -- has suffered the lion’s share of attacks compared to other regions in Syria, is notable.
It said that in 2019, 82% of such attacks occurred in the northwest, 49 percent in 2018, 58 percent in 2017 and 85 percent in 2016.
Earlier this month, the Union of Medical Care and Relief Organizations (UOSSM) said 10 schools in total - including two nurseries - and the Idlib Central Hospital were hit by airstrikes and ground attacks.
Three nurses and a doctor were injured after Idlib Central Hospital was hit by an airstrike that heavily damaged the facility, the organization added.
A UN investigation into atrocities committed in Syria, published on Monday (March 2), accused Russia of direct involvement in war crimes for indiscriminate bombing of civilian areas.
Based on AA