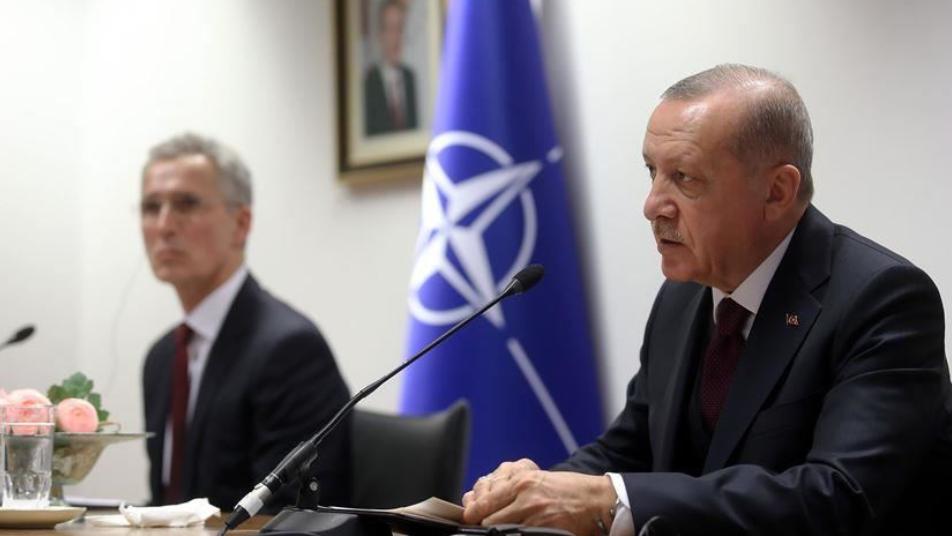 Erdogan urges NATO support in critical period
__new_Underarticle_image_EN__
Orient Net
Turkey’s president on Monday (March 9) called on NATO members to show their alliance with Turkey at this critical time.
“NATO is in a critical period in which it should clearly show the alliance’s solidarity [with Turkey],” Recep Tayyip Erdogan told reporters during a press conference alongside NATO Secretary-General Jens Stoltenberg.
Our allies should collaborate with Turkey without discrimination and with no political preconditions, he added.
Turkey has fought Syrian-based threats and the terrorist group ISIS for nearly a decade now and is the only NATO member state to see soldiers martyred, said Erdogan.
No European country has the luxury of being unconcerned about the conflicts and human drama in Syria, he said.
“No other ally has suffered more terror attacks than Turkey. No other ally hosts more refugees than Turkey,” said NATO chief Stoltenberg, praising Turkey’s efforts for the region’s security.
He also called Turkey an “important” ally which has “contributed to our shared security in many ways.”
The military alliance has invested heavily in missile systems and military bases in Turkey in years past, and it keeps on contributing to air and naval missions in Turkey, he said.
“Allies are prepared to continue to support Turkey and explore what more to do,” he said, reaffirming the bloc’s commitment to partnership.
__new_in_first_article1__
toltenberg also expressed his concerns over the security situation in Syria and the resulting migrant crisis.
“The Assad regime and Russia caused untold civilian suffering,” he said, adding that he hopes the cease-fire in Idlib, northwestern Syria reached last week by Turkey and Syria will grow into a standing peace.
The secretary-general called migration “a common challenge” and hailed the dialogue between Turkey and the EU to find a long-term solution for the crisis.
Erdogan and Stoltenberg's meeting lasted around one hour at the Permanent Delegation of Turkey to the European Union, amid
Erdogan’s one-day working visit to Brussels at the invitation of European Council President Charles Michel.
“Bilateral relations will be addressed thoroughly and steps to strengthen cooperation will be discussed during the meeting, which will also be attended by President of the European Commission Ursula von der Leyen,” said a statement by the Turkish Presidency.
The meeting will address “the latest developments in Syria, particularly Idlib, and the refugee issue as well as other regional and global matters,” it added.
Last month Turkey announced it would no longer stop asylum seekers from reaching Europe, complaining that the European Union had failed to keep its pledges under a 2016 deal on migrant, and warning of a refugee wave coming from Idlib.
Based on AA