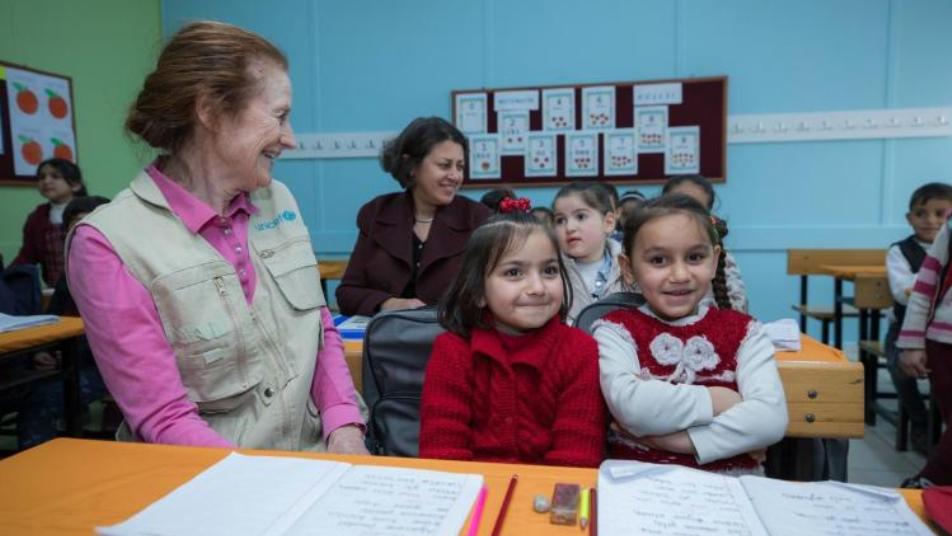 On 6 March 2020 at the Kahramanmaras Temporary Accommodation Center in Turkey, UNICEF Executive Director Henrietta H. Fore sits with first grade Syrian students attending classes.
__new_Underarticle_image_EN__
Orient Net
UNICEF Executive Director Henrietta Fore has just concluded a two-day trip to Gaziantep, Turkey, where she visited the humanitarian logistics hub in Bab al-Hawa on the border with Syria. She also toured a Syrian refugee camp in Kahramanmaras.
The visit comes amid an increasingly dire situation in northwest Syria, with some 600,000 children displaced just in the past three months. At the Bab al-Hawa border crossing, Fore saw trucks being loaded with winter clothes, jerry cans, hygiene items, high-energy biscuits and other essential supplies destined for children in northwest Syria. Since the beginning of the year UNICEF has sent in 100 trucks to the northwest.
“Sending aid across Syria’s borders has been a lifeline for vulnerable families,” Fore said. “Nine years since the conflict started, 5 million children still need aid. We must help them at all costs. We are deeply grateful to our local partners on the ground for their heroic work – sometimes despite the personal toll on them and their families.”
__new_in_first_article1__
At the Kahramanmaras camp, Fore visited a family who has been calling Turkey home for eight years. The children, aged 7-12, go to school and the father works in construction. Although they are safe and well-settled, they still dream of going home.
The camp currently hosts more than 11,000 people, half of them are children. It offers schooling for 3,700 children and training opportunities for young people.
“Turkey has generously hosted millions of Syrian children since the war began,” Fore said. “It is essential that this support continues.”