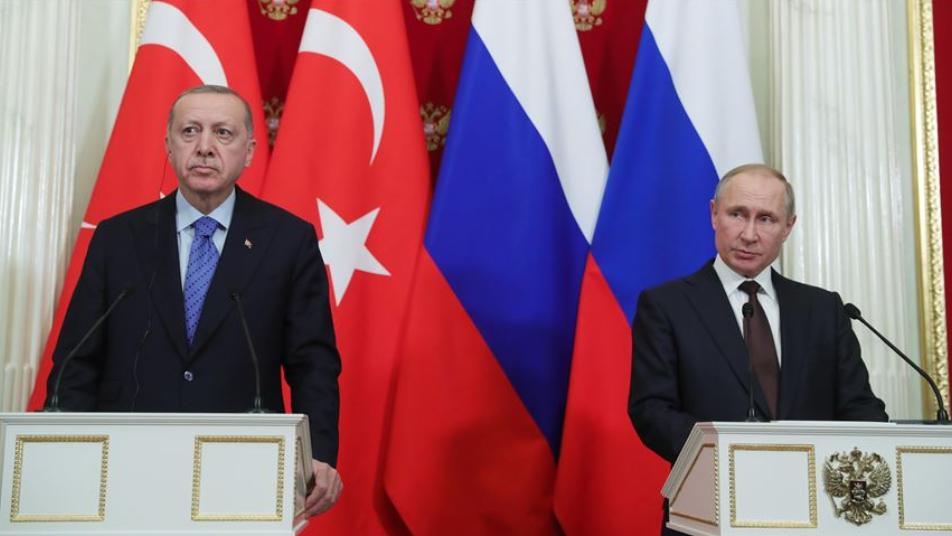 Orient Net
After weeks of tension, Turkey and Russia agreed on Thursday (March 5) to continue their cooperation in the northwestern Syrian province of Idlib, declaring a cease-fire while expressing an intention to provide a new status quo for the war-torn province.
Turkey and Russia have reached the agreement during a meeting between President Recep Tayyip Erdogan and his Russian counterpart Vladimir Putin in Moscow.
The cease-fire was expected to begin at midnight Friday, leading to a new status quo in Idlib.
Speaking in a joint press conference, Erdogan said the Assad regime and its aggressiveness are the main reasons behind civilian suffering in Idlib.
“Considering all the recent developments, a new status quo is inevitable in Idlib,” he added.
“We have deployed additional military units to Syria to ensure regional stability. Our priority is to enable de-escalation in Idlib. The cease-fire in Idlib will begin tonight a minute after midnight,” he also said.
Putin said: “We have always solved our problems by working together. Today was no different.”
Underlining attacks in Idlib must stop, Putin added: “We agreed to continue the will and conditions of Astana deal. We have prepared a document as a result of today’s meeting, hoping that it will put an end to civilian suffering in Idlib.”
The meeting comes amid growing tension in northern Syria’s Idlib province, where the Russia-backed Assad regime's offense has targeted civilians and Turkish soldiers, raising the prospect of a direct clash between Russian and Turkish forces.
The nearly three-hour-long summit between the two presidents was followed by an inter-delegation meeting for more than two and a half hours.
Based on DS