Amina Khoulani: “All I have hoped for is support in our demands for free, democratic Syria” 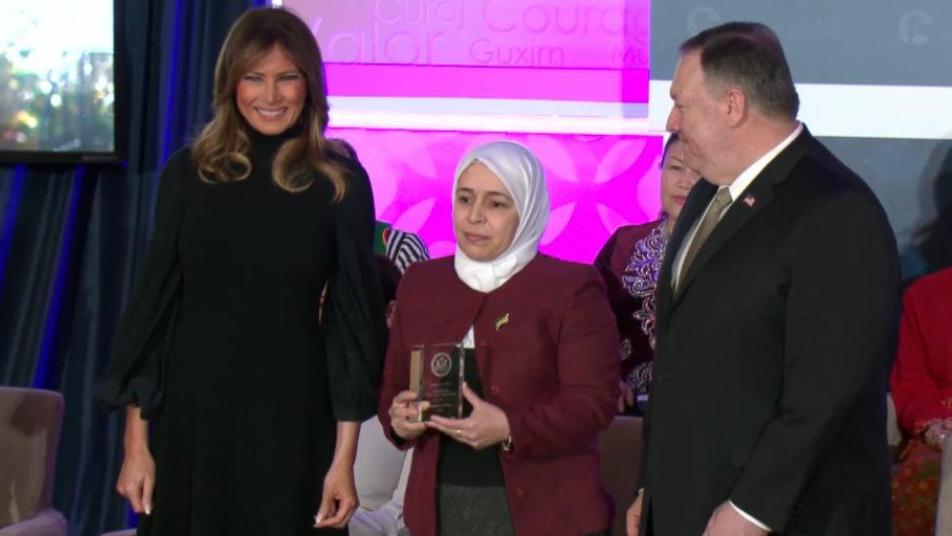 Orient Net
First lady Melania Trump and Secretary of State Michael Pompeo on Wednesday (March 5) delivered Amina Khoulani and 11 other women the International Women of Courage Awards at the State Department.
Khoulani, a survivor of the Assad regime’s detention and torture centers which have arbitrarily detained over 140,000 Syrians, is one of a dozen recipients of the US State Department's International Women of Courage Award (IWOC) for 2020.
“Khoulani has dedicated her life to helping the families of forcibly disappeared Syrians,” the State Department statement said.
Amina said in a statement published upon receiving the award that she is very proud to receive this award and that she dedicates it to her wonderful friends at the Families For Freedom movement. 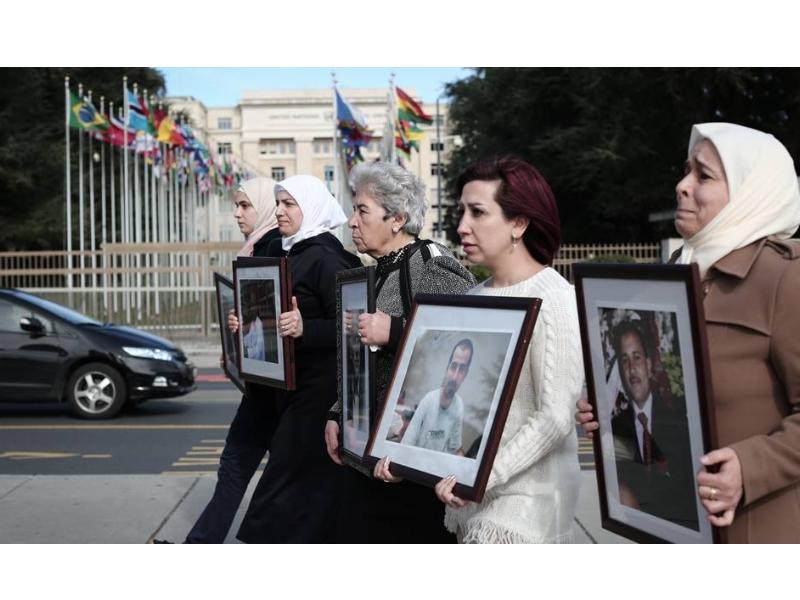 This award is a recognition of the work we have done together fighting for freedom for all detainees in Syria and demanding accountability for all criminals, most importantly the Assad regime which has been responsible for so much suffering for so many of us, Amina said.
I would also like to congratulate the other winners of this Award. It is an honour to be amongst so many remarkable women and to hear their stories, she added.
Amina dedicated this honour to the women and children left behind in the detention facilities in Syria. “I promised I would be a voice for them in the world, and I hope that today I am making another step in fulfilling that promise. I dedicate it to Dr Rania Al-Absi, who was detained with her husband and five children; to Dr Faten Rajab; to the lawyer Razan Zeintouneh; to Samira Al-Khalil, to Samar Saleh and all those disappeared by ISIS,” Amina said.
she also dedicated this award to the brave women of Idlib: the wonderful Nevin Al-Houtari, lawyer Ghada al-abbar, writer Iman Mohamed, artist Amani Al-Ali, engineer Mazna Al-Jundi, and the heroic women of the White Helmets. To every Syrian woman struggling for a free and democratic Syria.
Like so many of my fellow Syrians, I have never asked for any honor or awards from the US or the world. Instead all I have hoped for is support in our demands for a free and democratic Syria, where all detainees are freed and detention centres closed, Amina concluded her statement.
Amina told the story of her three brothers at Alive in Graves, an event in London organised by Amnesty International UK, Save The Rest, and Urnammu, in September 2018.
Amina Khoulani is one of the founders of Families for Freedom, a women-led Syrian movement calling for the release of detainees, and for justice in the many, many cases of detainees tortured and killed.
To Amina Khoulani, Dr. Al-Ghawni, and the hundreds of thousands of Syrians affected by the Assad regime’s practice of arbitrary detention, torture, disappearance, and killing, the United States stand with you in your pursuit of justice, and will spare no effort to bring the regime’s torture to a halt. The Syrian people deserve an end to their suffering, a pathway to justice, and the chance to live in peace, he added.
The other recipients this year are Zarifa Ghafari of Afghanistan, Lucy Kocharyan of Armenia, Shahla Humbatova of Azerbaijan, Sayragul Sauytbay of China, Jalila Haider of Pakistan, Ximena Galarza of Bolivia, Claire Ouedraogo of Burkina Faso, Susanna Liew of Malaysia, Amaya Coppens of Nicaragua, Yasmin al Qadhi of Yemen, and Rita Nyampinga of Zimbabwe. 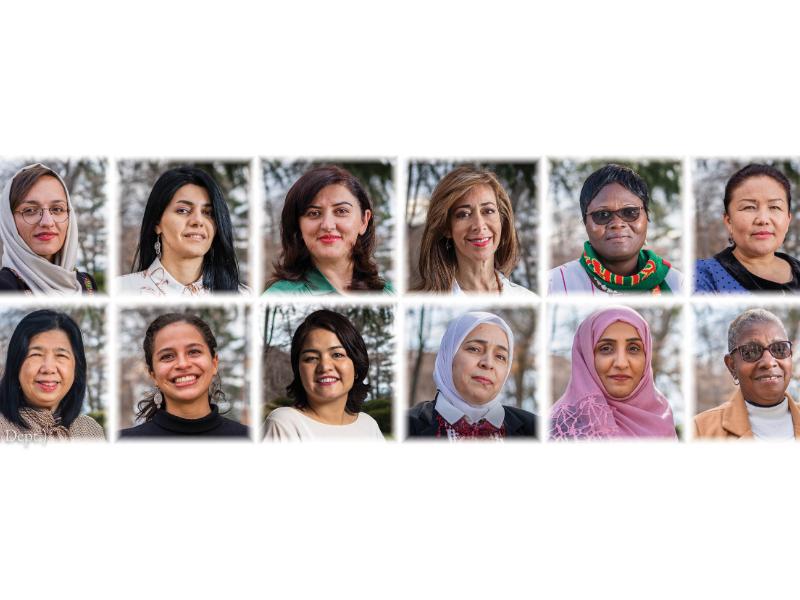 For the fourth consecutive year, first lady Melania Trump on Wednesday attended the International Women of Courage Awards at the State Department.
Peacemakers, activists, lawyers, journalists, politicians and defenders of human rights. These are the recipients of the 2020 International Women of Courage Award.
“We are here to honor a quality that all of the women onstage possess, and that is courage,” said first lady Melania Trump at the March 4 awards ceremony. “Through their work, they empower women everywhere.” 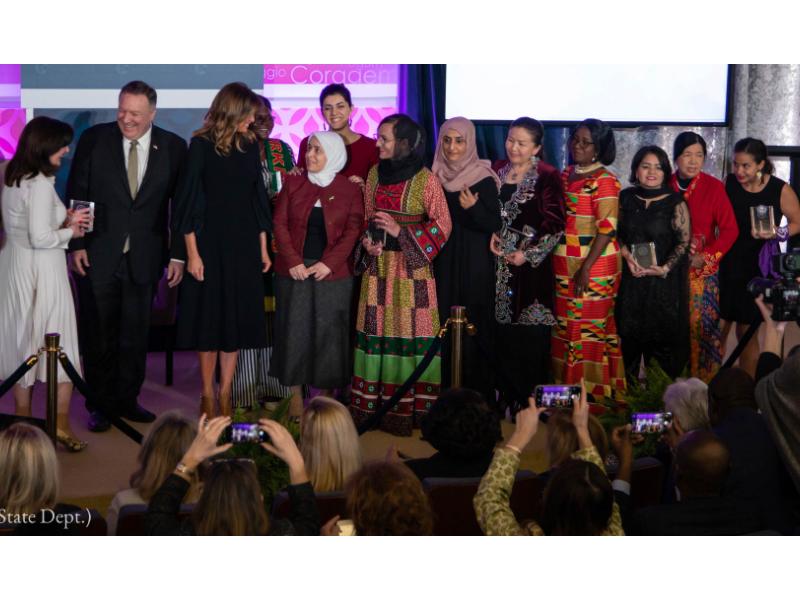 Each year, the State Department honors women from across the world for their bravery, leadership and tenacity. Since 2007, the United States has recognized more than 146 awardees from 77 countries.
“The world needs women who continue to be willing to take risks and summon courage,” said Secretary of State Michael R. Pompeo. “And unquestionably, today’s awardees are doing just that.”