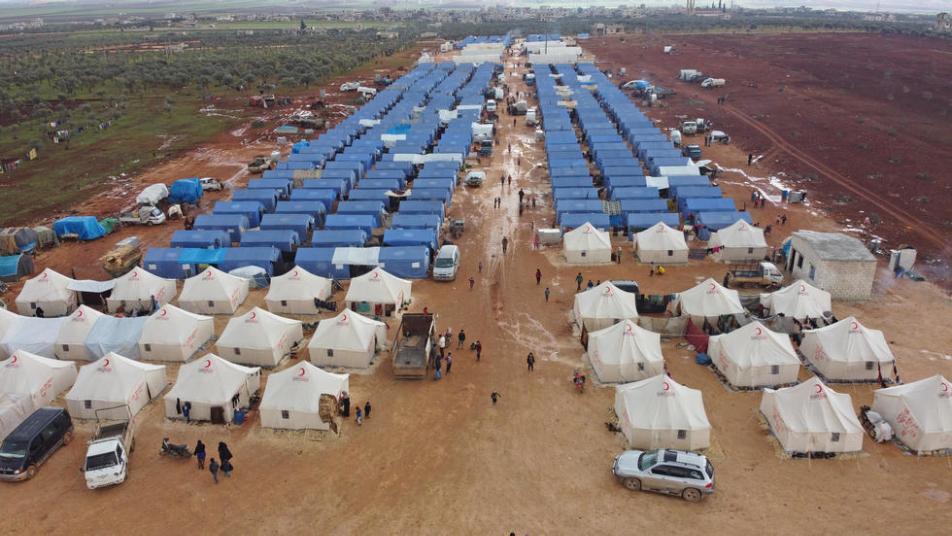 Satellite imagery analysed by the Harvard Humanitarian Initiative shows agricultural fields filling up with camps for the displaced in Syria's northwestern Idlib province where regime militias have been pressing an offensive since December
Orient Net
Fighting in northwest Syria has rendered large parts of the region uninhabitable for civilians now crammed into an ever-shrinking area where conditions are dire, says a report released Wednesday (March 4).
The Harvard Humanitarian Initiative's Signal Program analysed satellite imagery of towns and camps in Idlib province, where the Assad regime has been pressing a devastating offensive since December.
"In the areas examined, the researchers estimate that nearly one-third of buildings have been significantly damaged or destroyed," said a statement released with the report, which Harvard produced with Save the Children and World Vision.
"With most of these areas' inhabitants having fled before or during the offensive, the destruction of homes and vital civilian infrastructure will make it nearly impossible for families to return in the near future," the statement added.
The satellite imagery analysed in the report shows agricultural fields filling up with camps for the displaced in a matter of months, as well as levelled villages and towns.
Regime and allied militias backed by Russian air strikes have clawed back significant territory since December, triggering a massive exodus of a scope yet unseen in the nine-year-old Syrian conflict.
Routing bombing of schools and hospitals has forced civilians to flee town after town, heading towards the Turkish border. Some three million people are now trapped in the ever-shriking enclave in dire conditions.
"In the best case scenario, which is an immediate ceasefire, it will take months if not years to first physically rebuild the destroyed civilian infrastructure and then rebuild the trust for these communities to go back home," Save the Children spokeswoman Joelle Bassoul said.
A report released Monday by the UN Human Rights Council's Commission of Inquiry on Syria suggested the regime had intentionally targeted civilian infrastructure to scare the population away and facilitate its military reconquest.
Attacks carried out by pro-regime militias targeted civilian infrastructure, including specially protected objects, the UN commission said.
"As a result, civilian areas were rendered uninhabitable," it added, citing the key Idlib province towns of Maaret al-Numan and Khan Sheikhun.
It said the levelling of certain towns was carried out "in an apparent effort to accelerate capture of strategic motorways".
More than half of the nearly one million people displaced over the past three months are children, tens of thousands of whom are sleeping rough in the bitter cold.
Based on AFP