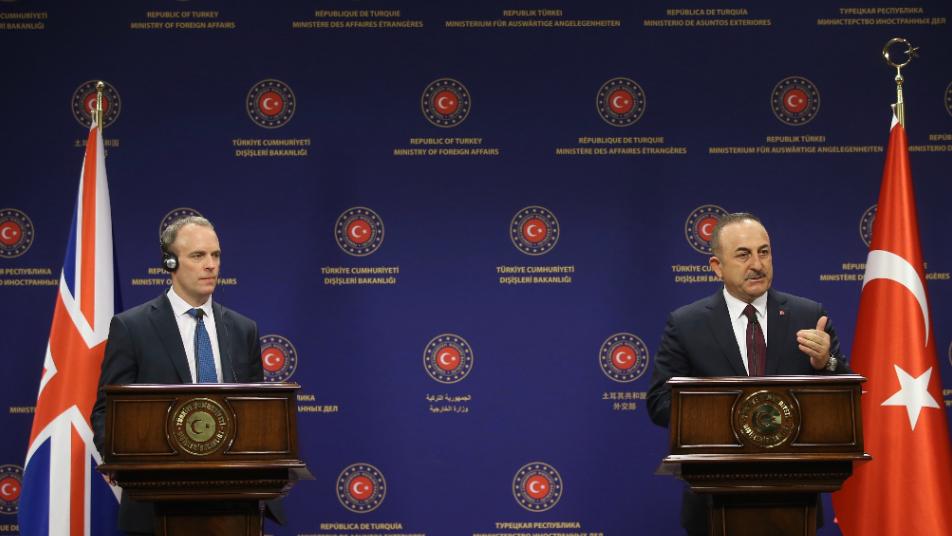 Foreign Minister Mevlüt Çavuşoğlu attends joint news conference with his British counterpart Dominic Raab in Ankara, Tuesday, March 3, 2020 (AA Photo)
__new_Underarticle_image_EN__
Orient Net
The Assad regime and Russia hold primary and overriding responsibility for the human suffering in Syria, UK Foreign Secretary Dominic Raab said during a joint news conference with Foreign Minister Mevlut Cavusoglu on Tuesday (March 3).
“As NATO, we support Turkey's call for cease-fire in Syria,” Raab stated following a bilateral and inter-delegations meeting with Turkish officials, stressing that the reason of his visit was to show solidarity to Turkey and to underline the friendship between the two countries in these difficult days after Turkey lost more than 30 soldiers in an attack conducted by the Assad regime in northwestern Syria.
Reminding that Turkey is hosting millions of refugees, Raab also said that cooperation is needed regarding international responsibilities. Further elaborating that the UK had called on the UN Security Council to hold an emergency meeting on the Idlib crisis, Raab said “For decades Turkey has been a staunch ally to NATO and one of its largest contributors in military personnel. We support Turkey’s efforts to re-establish the ceasefire agreed in 2018 and protect those innocent civilians fleeing the regime’s monstrous assault.”
The Foreign Secretary condemned the attacks of Russia and the Assad regime and raised concerns regarding the escalation in his first official visit to Turkey as Foreign Secretary.
__new_in_first_article1__
EU countries have the obligation to take the applications for protection of refugees coming to their doors and providing this protection for those eligible, just as Turkey has fulfilled its own obligations until today, Cavusoglu stated, indicating the harsh responses given to refugees trying to cross to Europe through Greece.
He further stressed that the EU has to respect humanitarian rights and that the treatment toward refugees was not sustainable.
Thousands of migrants have been forced to sleep in the open, some since Friday, exposed to the elements and in temperatures close to freezing in the border province of Edirne in northwestern Turkey.
Based on DS