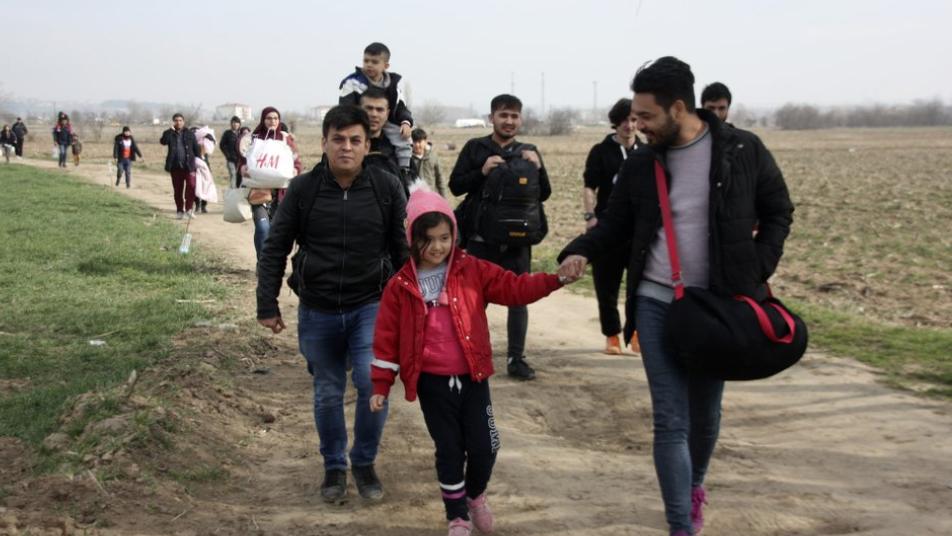 Migrants walk to the Turkey-Greece border, in Pazarkule, Edirne, Friday, Feb. 28, 2020. NATO envoys were holding emergency talks Friday at the request of Turkey following the killing of 33 Turkish soldiers in northeast Syria, as scores of migrants gathere
Orient Net
Greece and Bulgaria on Friday (February 28) tightened border control and boosted border patrols after Turkey said it would no longer prevent refugees from going to Europe, officials said.
"Greece has tightened the guarding of its borders to the maximum level possible," a government source in Greece said.
A Greek police source told AFP border patrols had been doubled, and a general call for heightened readiness had been issued.
"Everything is under control, there is no reason for concern," the source told AFP. "We are monitoring the situation and adapting our forces (accordingly)," another police source said.
An army source in Greece said around 300 people had been spotted on the Turkish side of the border in the northeastern Evros region. "These numbers are not out of the ordinary," the officer said.
A group of migrants was walking in northwest Turkey toward its border with Greece, the Demirören News Agency (DHA) reported on Friday after Turkey announced the country will no longer stop Syrian refugees from reaching Europe.
There were around 300 migrants, including women and children, in the group which began heading toward the border in Turkey's Edirne province around midnight. Syrians, Iranians and Iraqis were among those in the group, reports said.
As their numbers grew in the morning, Greece announced that it is shutting down Kastanies/Pazarkule border gate with Turkey to prevent refugees from entering the country.
In Bulgaria, Prime Minister Boyko Borisov said that his country has tightened control of the border with Turkey.
Shortly after the killing of 33 Turkish soldiers in an airstrike in Idlib in northern Syria, a senior Turkish official said early Friday that Ankara would no longer close its border gates to refugees who sought to go to Europe, in anticipation of the imminent arrival of refugees from Syria's Idlib where nearly a million have been displaced.
Based on DS