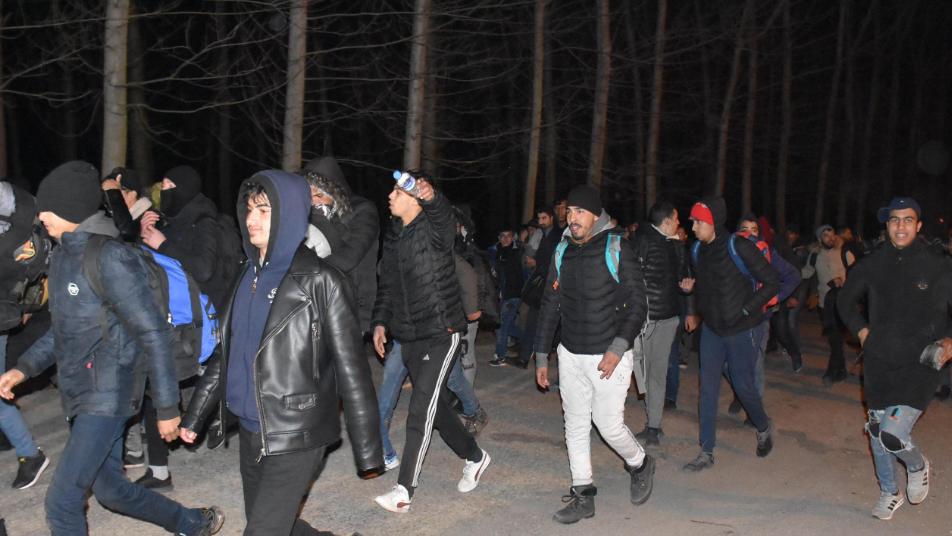 Syrian migrants who gathered in the Turkish border town of Edirne walk toward the Pazarkule Border gate to cross into Europe on Friday, Feb. 28, 2020 (IHA Photo)
__new_Underarticle_image_EN__
Orient Net
Turkey will no longer close its border gates to refugees who want to go to Europe, a senior official told AFP on Friday (February 28), shortly after the killing of 33 Turkish soldiers in an airstrike in northern Syria.
"We will no longer keep the doors closed for refugees who want to go to Europe," the official said on condition of anonymity.
Nearly 300 migrants including Syrians have already arrived in Edirne province on the border with Greece in a bid to go to Europe, the private DHA news agency reported.

Another group of migrants arrived on the coast of Ayvacik in Canakkale, western Turkey, and wanted to go to the Greek island of Lesbos by boats, it reported.
__new_in_first_article1__
The killing of Turkish soldiers in Idlib after an Assad air strike has prompted an emergency meeting chaired by President Recep Tayyip Erdogan.
Turkey, which is already home to around 3.6 million Syrian refugees, fears more people arriving in the country where there is growing popular discontent against their presence.
In a series of tweets, Erdogan's top press aide, Fahrettin Altun, accused Bashar Assad of "conducting ethnic cleansing" and seeking to drive millions of Syrians out of Idlib.
"These people will try to escape to Turkey and Europe. Already hosting close to 4 million refugees, we do not have the capacity and resources to allow entry to another million," he wrote.
Greece and its EU partners also fear another influx of refugees from Syria after more than one million made their way there in 2015 before an EU-Turkey accord was reached on controlling the numbers.
Based on AFP