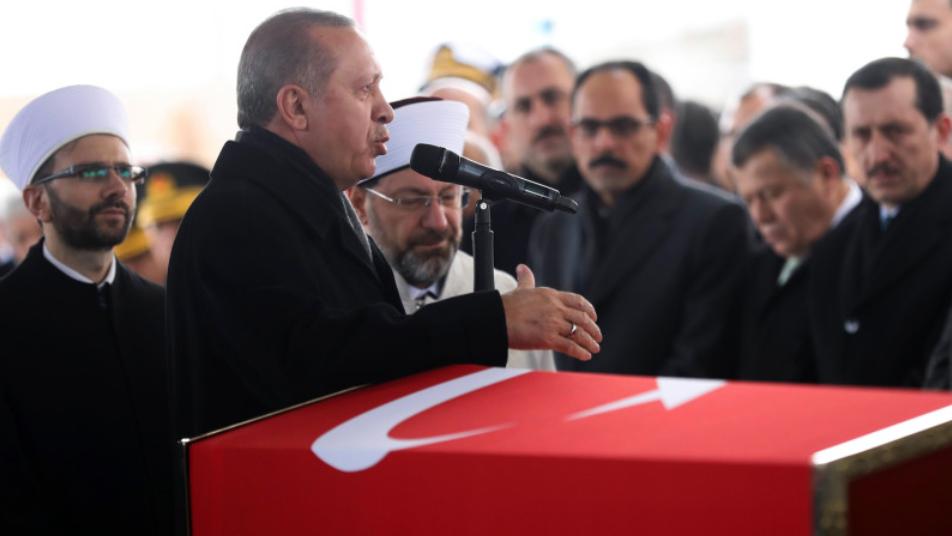 33 Turkish soldiers were killed and 32 others were injured in a Russia-backed Assad regime airstrike in northwestern Syria's Idlib Thursday (February 27), confirmed the Governor of Hatay Rahmi Dogan.
Gov. Dogan initially confirmed the death toll. Some 32 more wounded Turkish soldiers are in stable condition and are being treated in hospitals, he added.
With the attack, the growing alarm in Ankara over the recent escalation of tensions reached a tipping point.
Late Thursday, President Recep Tayyip Erdogan convened an emergency national security meeting on tensions in Idlib.
Security sources told Daily Sabah that all ministers and senior officials, including the National Intelligence Organization (MIT) chief Hakan Fidan, were present in the meeting that started at 9:30 p.m. and lasted nearly six hours.
"We are hitting, with land and air backup, all known regime targets, and will continue to do so. We'll continue our operations in Syria until the hands that attacked our flag is dealt with," Presidential Communications Director Fahrettin Altun said.
In retaliation, Turkish artillery pounded Assad regime targets along the frontline in Idlib. Turkey also carried out missile attacks on targets in Syria's central Hama, northwestern towns of Nubl and Zahraa, as well as Latakia.
__new_in_first_article1__