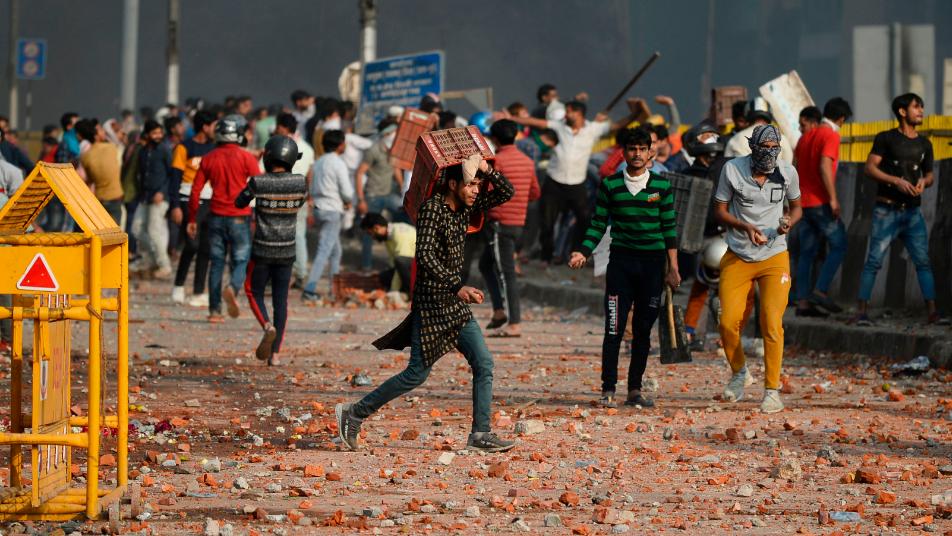 Demonstrators gather in the street following clashes between supporters and opponents of a new citizenship law, in the Bhajanpura area of New Delhi on Monday. Sajjad Hussain/AFP/Getty Images
Orient Net
Indian police used tear gas and smoke grenades in New Delhi on Monday (February 24) to disperse thousands of people demonstrating for and against a new citizenship law just before US President Donald Trump’s maiden visit to the city.
Reuters reporters saw multiple vehicles set on fire, metal barricades torn down and thick smoke billowing as thousands of supporters of the new law clashed with opponents, both sides hurling stones.
India’s capital has been a hotbed of protest against the law, which eases the path to people from neighboring countries to gain Indian citizenship.
This has led to accusations that Prime Minister Narendra Modi and his Hindu nationalist Bharatiya Janata Party (BJP) are undermining India’s secular traditions.
The BJP denies any bias against India’s 180 million-strong Muslim minority, but objectors have been camping out in several parts of New Delhi for two months.
At least half a dozen people were injured in Monday’s violence, with police vastly outnumbered.
Local politician Yogendra Yadav urged police in a tweet to “prevent communal violence”.
The clashes stretched over nearly a kilometer (half a mile) of road and lasted from early afternoon until well into the evening.
The protesters appeared to be divided along religious lines, and some pulled members of the media aside and asked them about their religion.
Monday’s clashes were some of the worst seen in New Delhi since the protests against the Citizenship Amendment Act (CAA) began in early December.
“We are in support of the CAA. If they want to protest, they should go somewhere else,” said a protester who gave his name only as Amit.
The latest round of violence came just as Donald Trump began his first visit to India as US president, addressing a rally in Modi’s home state of Gujarat.
Trump is due in New Delhi later on Monday, where he will hold talks with Modi about 10 km (six miles) from the scene of the violence.
In Gujarat, Trump told a gathering of more than 100,000 people that “India is a country that proudly embraces freedom, liberty, individual rights, the rule of law, and the dignity of every human being”.
Based on Reuters