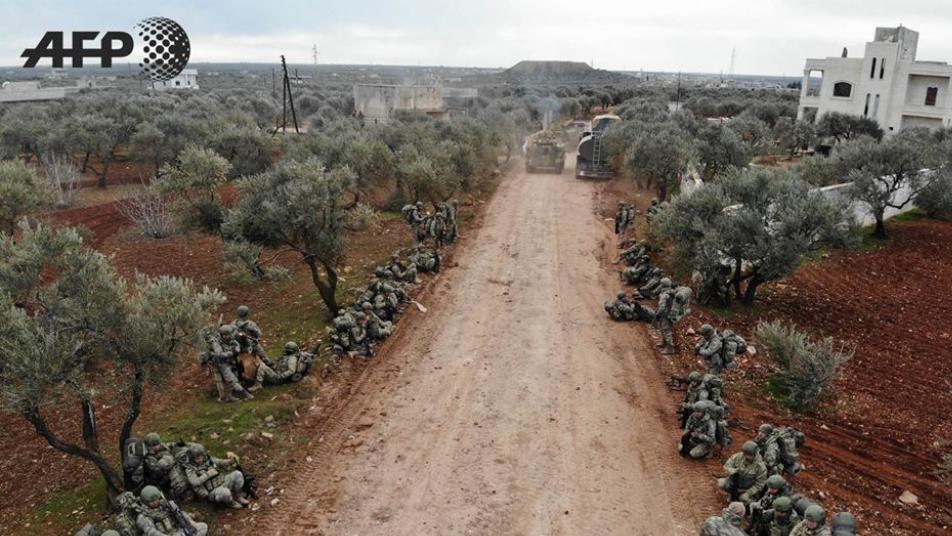 An aerial view shows Turkish soldiers gathering in the village of Qaminas, about 6 kilometres southeast of Idlib city in northwestern Syria on February 10, 2020. Omar HAJ KADOUR / AFP
__new_Underarticle_image_EN__
Orient Net
Two Turkish soldiers were killed and five others wounded when airstrikes hit Turkish elements in Idlib, the Defense Ministry said Thursday (February 20).
Turkish soldiers and Syrian opposition groups in northwestern Syria’s Idlib on Thursday launched a military operation against Assad militias, which have been advancing south of the province.
Earlier this month five Turkish soldiers were killed and five others wounded when Assad regime militias hit a Turkish observation point at eastern Idlib's Taftanaz Airport with heavy artillery.
__new_in_first_article1__
Another Assad regime attack in February killed seven Turkish soldiers and one civilian contractor working with the Turkish military and injured over a dozen people.
Idlib has been a stronghold of opposition and anti-government armed groups since the outbreak of the Syrian revolution in 2011.
In September 2018, Turkey and Russia agreed to turn Idlib into a de-escalation zone in which acts of aggression are expressly prohibited.