Erdogan: Turkey has made all preparations to carry out cross-border operation in Idlib 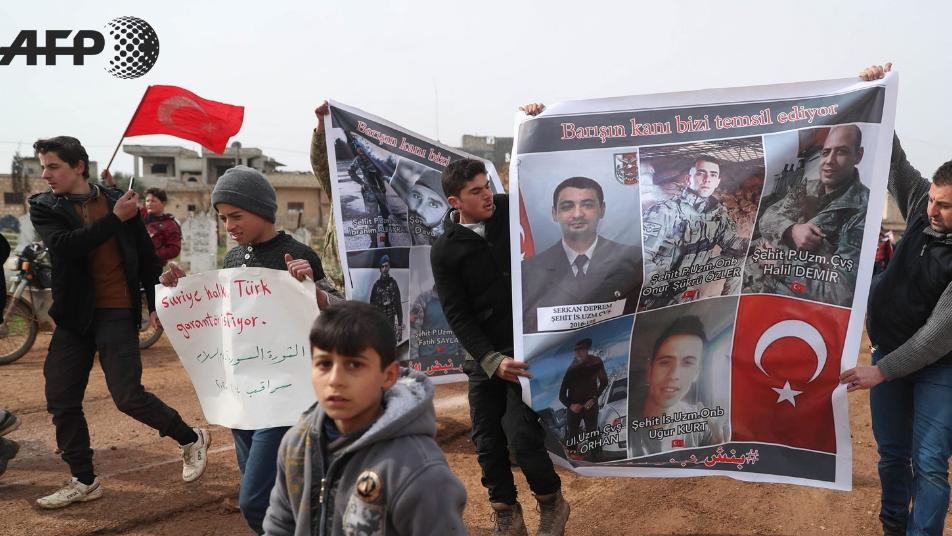 People march with portraits of Turkish soldiers killed in Syria and with flags of Turkey as they demonstrate by a Turkish military observation post in the town of Binnish in Syria’s northwestern province of Idlib, in February 14, 2020. Omar HAJ KADOUR /
Orient Net
Turkey will not hesitate to take care of its security concerns by itself if other countries in the region fail to assure the country on the matter, President Recep Tayyip Erdogan said Wednesday (February 19).
Turkey launching a cross-border operation into Idlib, northwestern Syria, is just "a matter of time," the Turkish president said.
"As with all [previous] operations, we say 'we could suddenly come one night.' In other words, an Idlib operation is a matter of time," Recep Tayyip Erdogan told his party's parliamentary group in the capital Ankara, referring to three Turkish operations into northern Syria since 2016.
Meetings with Russian officials on ending the bloodshed in Idlib, a conflict-battered province covered by a nominal cease-fire, have failed to produce results, said Erdogan.
"Although the meetings will continue, it is a reality that we were very far from what we want, " he said.
Erdogan added: "Turkey has made all preparations to carry out its own operation plans in Idlib."
Turkey is determined to transform Idlib into a safe place at any cost for the sake of both Turkey and the region's people, the president said.
For several years, Turkey has stressed the safety of Syrians along its southern border, both from terrorists seeking to form a "terror corridor" in northern Syria, and from attacks by the Assad regime, Russian forces, and Iranian-backed militias.
In September 2018, Turkey and Russia agreed to turn Idlib province into a de-escalation zone in which acts of aggression are expressly prohibited.
But since more than 1,800 civilians have been killed in attacks by regime militias and Russian forces, flouting both the 2018 cease-fire and a new one that started Jan. 12.
Based on AA