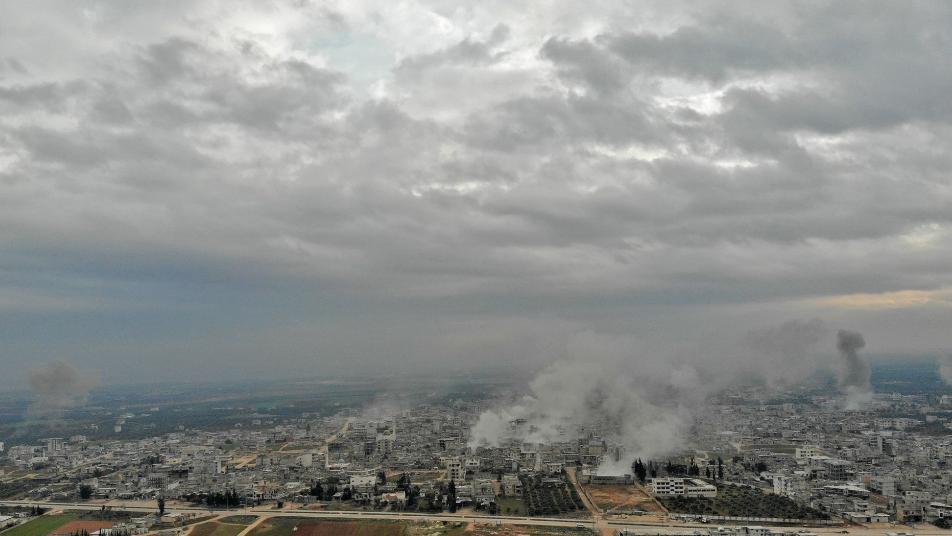 Smoke billowing from aristrikes by the Assad regime and allies on the town of Sarmin, southeast of the city of Idlib, this month. Omar Haj Kadour/Agence France-Presse — Getty Images
Orient Net
At the Turkish border with Syria, tales of the desperation unfolding on the other side, where some 900,000 people are fleeing a Assad assault.
A slight man in a cotton jacket, carrying a knapsack, shivered in the cold, waiting for the Turkish border gate to Syria to open.
Hundreds of thousands of Syrians are trying to get out of Syria. Yahya Jamal, 21, was trying to get back in.
His father had just died, he said. His family had fled their home under bombardment and were sleeping under the trees. So even though he had smuggled himself into Turkey several months ago, he was going back to Syria to help them.
“There is nowhere to take them,” he said, his face white with shock. “It is impossible to find a safe place.”
Hidden behind the hills of the Turkish border crossing at Reyhanli, a humanitarian calamity is unfolding on the Syrian side.
The Assad regime, backed by Russian forces, has accelerated its months long offensive to seize control of Idlib, the last province held by the opposition. Facing heavy bombardment of towns and villages, about 900,000 people, mostly women and children, have fled their homes since December, joining the largest exodus of Syria’s war since it began nine years ago.
Most have headed north, toward the Turkish border, and are living out in the cold. The lucky ones are crammed into tent camps, others sleeping in the open on the surrounding hillsides and olive groves. At least 12 children have died of exposure.
Turkey, already host to more than three million Syrian refugees, has closed its border since 2015 to prevent a further influx. That has left the displaced people of Idlib trapped between advancing Assad and Russian troops and the Turkish border.
Reyhanli, a small agricultural town surrounded by orchards and cotton fields, is the main border crossing to and from Idlib although it is closed to general traffic. A concrete border wall snakes up the craggy hillside away from the customs gate and flocks of sheep dot the hills.
Over the weekend, half a dozen trucks loaded with donated clothes, blankets and food sent from all over Turkey were lined up in orderly fashion, waiting to enter Syria.
A few Syrian pedestrians, mostly medical personnel and traders who have permission to cross the border, clustered at the gate to cross on foot.
A jewelry trader, Muhammad, was traveling with his wife, Amina, to fetch their children from Syria and bring them back to Turkey. Some traders with business on both sides of the border are allowed to come and go.
He described the mood across the border in one word: “Threat.”
The couple, like others interviewed for this article, asked to be identified by only their first names out of fear of being identified by the Assad regime.
“People are afraid,” Muhammad said. “The situation is very bad. People are living in the streets, under the trees. They are very cold.”
Public buildings and private houses are overflowing and it is hard to find a tent or any kind of shelter, he said. There is no food and no work.
“You can see a lot of families sleeping on cardboard and blankets in the streets,” he said. “All the towns are like that. If the bombardment does not stop there will be a disaster. Everyone is coming toward the border.”
A medical doctor, who gave his name only as Dr. Muhammad, was registering his family at the border immigration post. He said he had evacuated his wife and four children from their village in Syria just as government forces approached. He was able to get them into Turkey while he was still working in a small field hospital in Syria.
The hospital is treating up to 300 patients a day. “We lacked most imported equipment,” he said. “Fuel oil is scarce or very poor quality. Prices are getting higher and higher.”
The road was clogged with refugees fleeing to the border and the 20-mile journey took six hours. “It’s the most horrible scene,” he said.
Russian forces and Assad militias, advancing rapidly from the south and east of Idlib, have reached the town of Al Atarib, barely 15 miles from the Turkish border.
The attack seems to be a bid to cut supply lines from Turkey to areas held by the opposition forces or even an effort to encircle and besiege the city of Idlib itself, where some 700,000 people live, aid organizations said.
The Turkish army has deployed hundreds of troops and armor in the north of the province to protect the approaches to the Turkish border. President Recep Tayyip Erdogan of Turkey has demanded that Assad regime troops withdraw to previously agreed positions by the end of February or be forced to do so by Turkish forces. 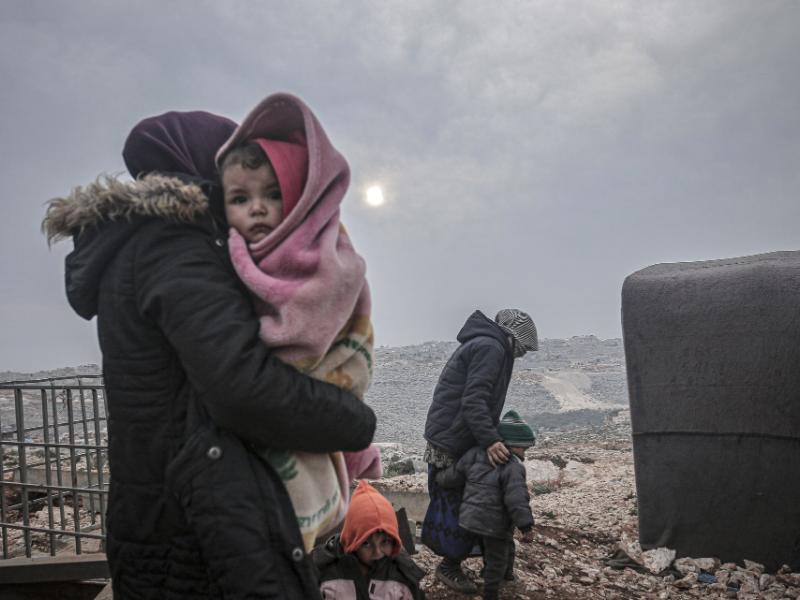 But Syrians at the border displayed little confidence that the Turkish army would stop the Assad advance.
“We wish the Europeans would strike the regime,” the trader, Muhammad, said. “We wish America would come. But we do not expect them to.”
“Bashar is killing us,” he blurted out, “Every day hundreds are dying and now America needs to do something.”
Otursan Mustafa, 26, a mother of three, was reached by phone at Kafr Karmin, a Syrian village less than four miles from the front line at Al Atarib, where she is stranded along with two other women and 14 children.
“There is bombardment all the time,” she said. “If I stopped talking you would hear it.”
The women, two of them widows, had fled three times since the latest offensive began on Dec. 18.
First, they fled their hometown, Maarat al Noaman, to the countryside, east of Idlib province. Then as the regime began an advance from the east, they fled to Kafr Karmin.
Now the fighting was again coming closer and the rest of the villagers had fled, Ms. Mustafa said. The three women were living in a half-built house — without doors, windows or electricity — but were loath to leave because at least they had a roof over their heads.
“We have nowhere to go,” Ms. Mustafa said. “There are no tents and no space to put a tent because there are so many people.”
Her 3-month-old son was crying all night, she said. “I am breast feeding, but the doctor said I must give him more food, he needs more.”
With the village emptied, they were running out of food, she said.
The Assad advance from the east has been so swift that many families were stuck, said Fouad Sayed Issa, the founder of Violet, a Syrian nonprofit relief organization.
Violet fields 1,000 volunteers who rent, beg or borrow trucks to evacuate families who are stuck without transportation or fuel in front-line areas.
The scale of the movement of people is staggering, he said. The group rescued 17,000 people from the town of Ariha in one operation. A United Nations camp of 10,000 displaced people emptied almost overnight as government troops neared. Everyone is converging on the already established camps by the Turkish border.
“It’s like the end of the world,” he said. Thousands of people have massed at the camps, standing around, hoping for assistance.
“The biggest problem is shelter,” Mr. Issa said. “Even if you have money you will not find anything to rent or buy. Tents are full and there are no more camps.”
He, like other Syrian aid workers, expressed frustration that the relief effort has fallen far behind the huge need and is mired in bureaucracy. “The UN has 5,000 tents but people need 60,000 tents,” he said.
As the Assad shelling closes in, more people will flee, he predicted.
“No one will stay,” he said.
That left only one solution, he said — for Turkey to open its border to the refugees.
“We are advocating they open the border,” he said. “Ankara has to decide.”
By Carlotta Gall
Saad al-Nassife contributed reporting.
Edited according to Orient Net
Link to the original source of NYT