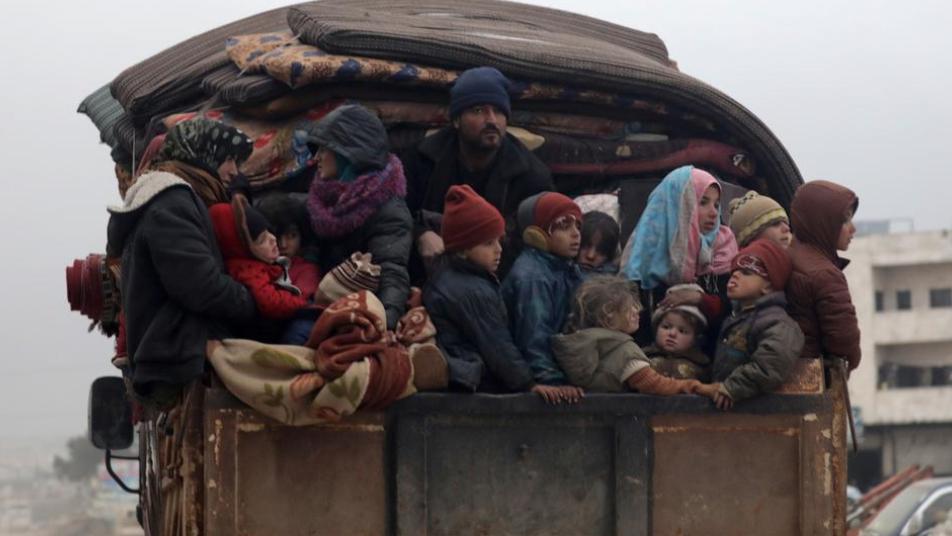 Internally displaced Syrians from western Aleppo countryside, ride on the back of a truck with belongings in Hazano near Idlib, Syria, February 11, 2020. (Reuters)
Orient Net
Turkish President Recep Tayyip Erdogan is seeking to ensure a humanitarian catastrophe does not befall northwest Syria's Idlib province, US President Donald Trump said Tuesday (February 18).
"He’s fighting on Idlib," Trump told reporters before boarding Air Force One. "He doesn’t want people to be killed by the thousands, and hundreds of thousands."
Trump said Washington and Ankara are "working together" to determine what can be done amid Assad regime offensive backed by Russia and Iranian regime that the UN said has led to the displacement of 900,000 people already.
"You have a lot of warring going on right now, a lot of warring going on, but I am dealing with President Erdogan," Trump said.
Mark Lowcock, the UN's humanitarian affairs chief, said Monday that "indiscriminate" violence in the region reached "a horrifying new level" since the regime offensive began in December and he demanded the Security Council to take action to avoid catastrophe of historical proportions.
"The biggest humanitarian horror story of the 21st Century will only be avoided if Security Council members, and those with influence, overcome individual interests and put a collective stake in humanity first. The only option is a ceasefire," he said.
In September 2018, Turkey and Russia agreed to turn Idlib province into a de-escalation zone in which acts of aggression are expressly prohibited.
But since more than 1,800 civilians have been killed in attacks by Assad regime and Russian warplanes, flouting the 2018 cease-fire and a new one that started Jan. 12.
Based on AA