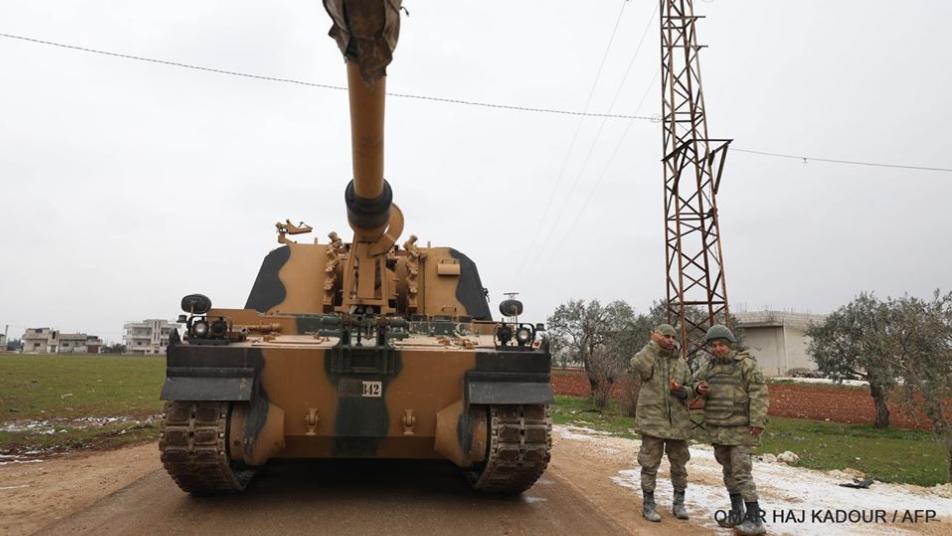 Turkish soldiers stand next to a Turkish 155mm self-propelled artillery gun in the town of Binnish in Syria’s northwestern province of Idlib, near the Syria-Turkey border on February 12, 2020. Omar HAJ KADOUR / AFP
Orient Net
The Turkish military neutralized 55 Assad regime militiamen in northwestern Syria's Idlib province, the Defense Ministry said Wednesday (February 12).
"According to the latest information received from our sources in Idlib, 55 regime troops have been neutralized today," the ministry said in a statement.
Turkish authorities often use the term "neutralized" to imply those in question surrendered or were killed or captured.
The latest development comes in the wake of an attack by Assad regime earlier this week that claimed the lives of five Turkish troops. It followed an attack last week by the regime in Idlib that killed seven Turkish soldiers and one civilian contractor working with the Turkish military. More than a dozen people were also injured.
Turkey retaliated for both attacks, hitting scores of targets and killing 200 Assad regime militiamen.
If Turkish soldiers in Syria are again targeted, Turkey will strike at Assad regime militias regardless of the 2018 Sochi deal with Russia, Turkey’s president said on Wednesday.
Turkish troops are in Idlib -- nominally a cease-fire zone, under a deal between Turkey and Russia -- as part of an anti-terror and peace mission.
Idlib has been a stronghold of the Syrian opposition since the outbreak of the Syrian revolution in 2011.
In September 2018, Turkey and Russia agreed to turn Idlib into a de-escalation zone in which acts of aggression are expressly prohibited.
But more than 1,800 civilians have been killed in attacks by Assad regime and Russia since then, flouting both the 2018 cease-fire and a new one that started on Jan. 12.
Based on DS