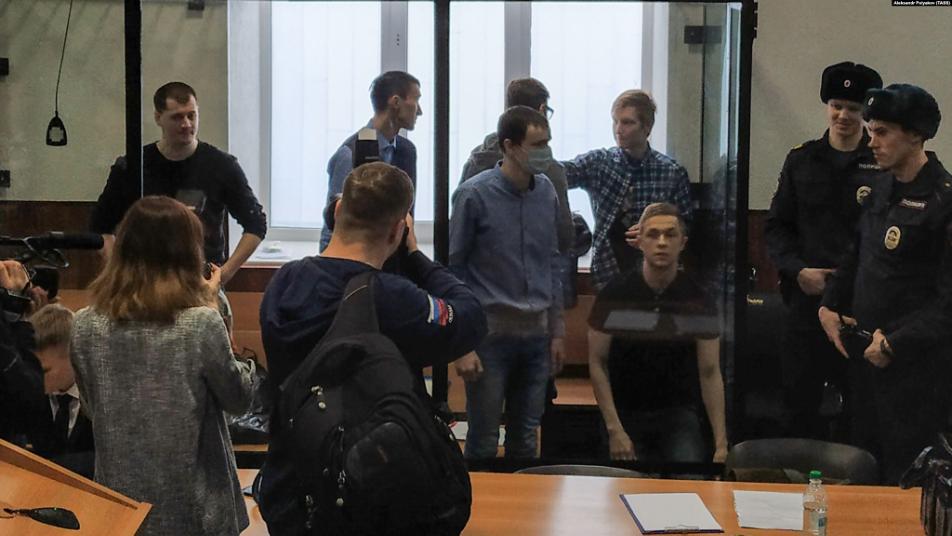 Members of an alleged terrorist community known as "Set" (the Network) attend a court hearing in Penza on February 10.
Orient Net
A court in the Russian city of Penza has sentenced seven activists from a group known as "Set'" (the Network) to prison terms of between six years and 18 years on terrorism charges that opposition figures have denounced.
On Monday (February 10), the Privolzhsky district court found the men, aged between 23 and 30 years, guilty of being members of a terrorist group.
Some of the defendants were also found guilty of possessing illegal weapons and explosives and attempted illegal drug sales.
The group members were arrested in October 2017 with the Federal Security Service (FSB) accusing them of creating a terrorist group with cells in Moscow, St. Petersburg, Penza, and Omsk, as well as in neighboring Belarus.
Investigators said the group planned to organize a series of explosions in Russia during the presidential election and the World Cup soccer tournament in 2018 "to destabilize the situation" in the country and to organize an armed mutiny.
Rights activists have said the case was fabricated. Some of the activists claimed that they were tortured while in custody, but the Investigative Committee rejected the claims.
Opposition leader Aleksei Navalny described the sentences as "horrific" in a post on Twitter, saying testimony about an "imaginary terrorist organization" was "beaten out using torture."
"Any minister in the Russian government is 10 times more of a criminal and a threat to society than these guys," he added.
The court called Dmitry Pchelintsev and Ilya Shaursky the group's leaders and sentenced them to penalties of 18 years and 16 years in prison, respectively.
Andrei Chernov was sentenced to 14 years, Maksim Ivankin to 13 years, Mikhail Kulov to 10 years, and Vasily Kuksov to 9 years in prison.
Arman Sagynbaev received six years in prison.
Before the sentences, Amnesty International called the terror charges "a figment of the Russian security services' imagination that was fabricated in an attempt to silence these activists."
The London-based human rights watchdog called the case "the latest politically-motivated abuse of the justice system to target young people."
Two other activists initially arrested in the case, Igor Shishkin and Yegor Zorin, made deals with the investigators and testified against the others.
Based on RFE