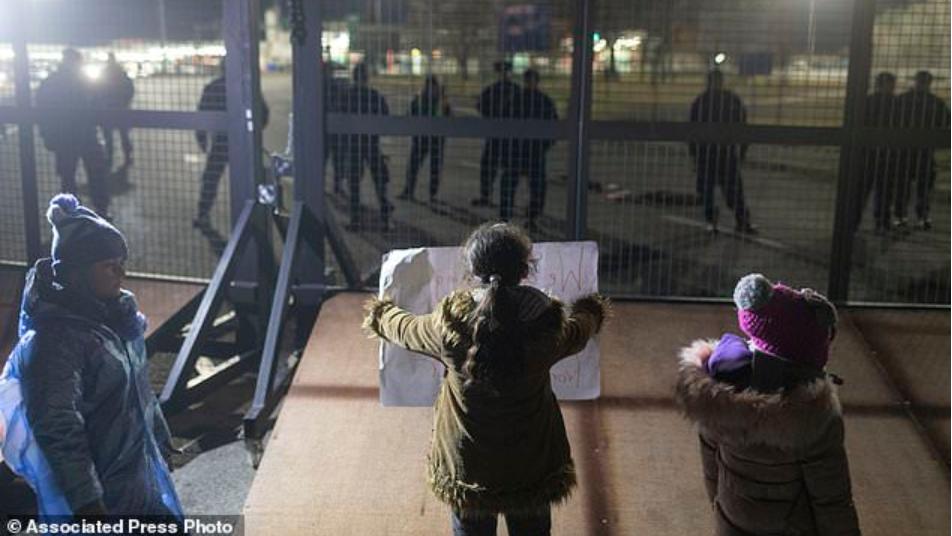 Children stand at the border line between Serbia and Hungary in Kelebija, Serbia, Thursday, Feb. 6, 2020. About two hundred migrants, including children, gathered Thursday at Serbia's border with Hungary to demand to be allowed entry into the European Uni

About 200 hundred migrants, including children, trapped in Serbia, set out in freezing and windy weather on Thursday (February 6) to walk about ten kilometers to the Hungarian border, demanding free and secure passage toward Western Europe.
Braving freezing evening weather and biting winds, the migrants camped at the Kelebija border crossing, blocking traffic. Wrapped in blankets or sleeping bags, many migrants were lying or sitting on the ground, holding their personal belongings close by.
The children shouted "Open borders!" while some of the migrant banners read "we are refugees, not criminals" or "we are running from war, not hunger." The border crossing was closed to traffic.
The protest in the northern city of Subotica, just outside European Union member state Hungary, came after migrants’ attempt to force their way through a border checkpoint last month.
The Serbian police were seen following the group along the road connecting Subotica and the nearby Horgos border crossing.
__new_in_first_article1__
“We want to work, we want a better life for our children,” Amira from Syria said.
“I am from Damascus city and they’re shooting bombs. What else can we do?”
Serbia was a focal point for migrants in 2015 and 2016, when hundreds of thousands fleeing wars and poverty in the Middle East and Asia traveled up through the Balkans to reach wealthy Western Europe.
Although the Balkan route was closed off in 2016, there are currently over 6,000 migrants from countries such as Syria, Iraq, Pakistan and Afghanistan in Serbia’s government-operated camps.
Based on Reuters, AP
قيم هذا المقال 27 0