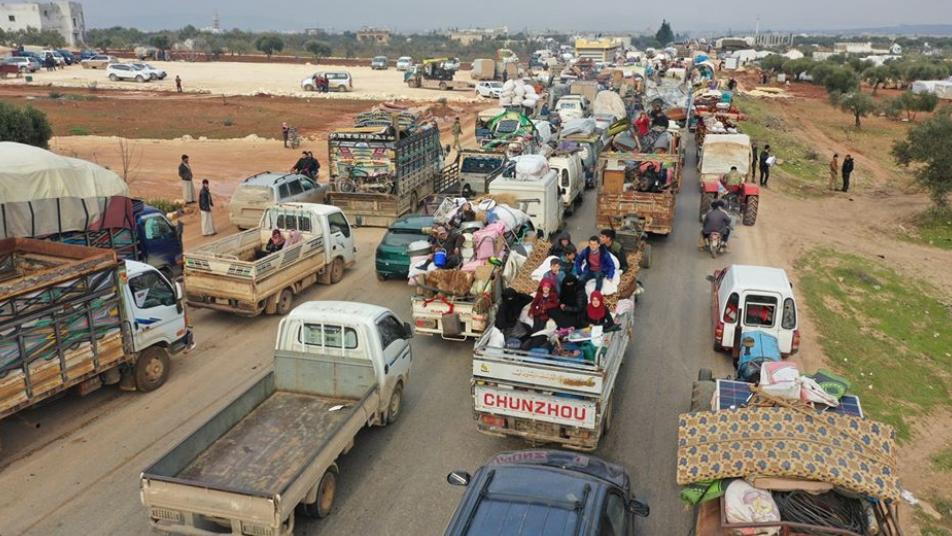 White Helmets Photo
Orient Net
More than 400,000 civilians have fled their homes inside Aleppo and Idlib countryside in Syria over the last 20 days due to attacks of the Assad regime and its allies.
Increased waves of displacement of civilian population from Idlib and Aleppo countryside has exceeded 400,000 people since the breach of ceasefire on the 16th of February, Syria's Response Coordination Group said on Thursday (February 6).
The report stresses that Assad regime is working on demographic change.
The report added that the number of civilian causalities in the same period has increased to 182 civilians, including 58 children.
The displaced civilians headed to areas near the Turkish border due to the attacks which violate a cease-fire agreement between Turkey and Russia.

On Wednesday, Russian-Assad warplanes and Assad helicopters intensified bombardment on Aleppo and Idlib countryside, killing 15 civilians, including three children and injuring 29 civilians, including seven children.
On Monday, a Russian warplane killed nine forcibly displaced civilians from the same family in their minibus, including four children and three women near Kafr Naha town in Aleppo countryside as they were fleeing Assad-Russian bombardment.
The United States on Wednesday offered help to Turkey and threatened sanctions to press Assad regime and its ally Russia to halt a major new offensive.
ON Tuesday, the UN Office for the Coordination of Humanitarian Affairs said since 1 December, some 520,000 people have been displaced from their homes, the vast majority -- 80 percent -- of them women and children.
UNICEF said Saturday that violence this week forced 6,500 children to flee daily, bringing the total number of displaced children in northwest Syria to more than 300,000 since early December.