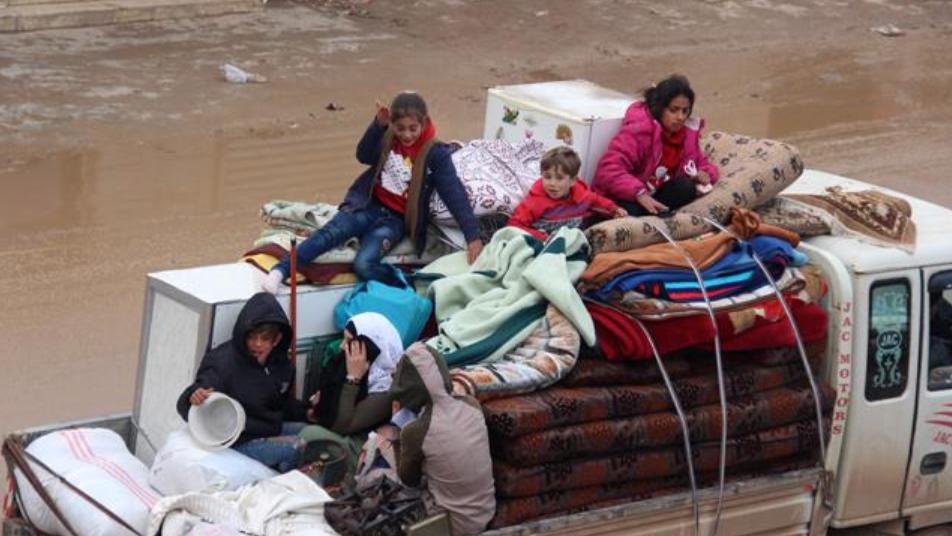 Displaced Syrians sit in the back of a truck loaded with belongings, passing through the town of Hazano in Idlib's northern countryside, on Wednesday, as people flee an ongoing Assad-Russian offensive (AFP photo)
Orient Net
The United States on Wednesday (February 5) offered help to Turkey and threatened sanctions to press Assad regime and its ally Russia to halt a major new offensive.
James Jeffrey, the US pointman on Syria, said Washington was "very, very worried" about the "extremely dangerous conflict" that has flared up in the northwestern Idlib region.
"Certainly, we are moving forward on additional sanctions," Jeffrey told reporters. He did not name the targets but suggested they would be in Syria.
On Wednesday, Russian-Assad warplanes and Assad helicopters intensified bombardment on Aleppo and Idlib countryside, killing 15 civilians, including three children and injuring 29 civilians, including seven children.
Jeffrey said that US President Donald Trump, under an executive order issued last year, has authority to "go after people who are not supporting the political process and, particularly, not supporting the ceasefire."
"So, we're looking at what we can do about that. And we're asking the Turks what help they need," he said.
But Jeffrey doubted Russia's justification that it had come under growing fire from the militants, who are not part of the ceasefire.
"We have seen only intermittent and not very strong or significant military actions on their part against the Russians," Jeffrey said.
"The Russians use this as an excuse, basically," he said, "to launch these massive attacks against the civilians."
Jeffrey said the immediate solution should be a "permanent ceasefire" before talks on "all issues" including the status of the militants.
Based on AFP